"[Colbert's] got a lot of the different capacities. Being able to expand upon [those] would be exciting," Stewart says of his peer. 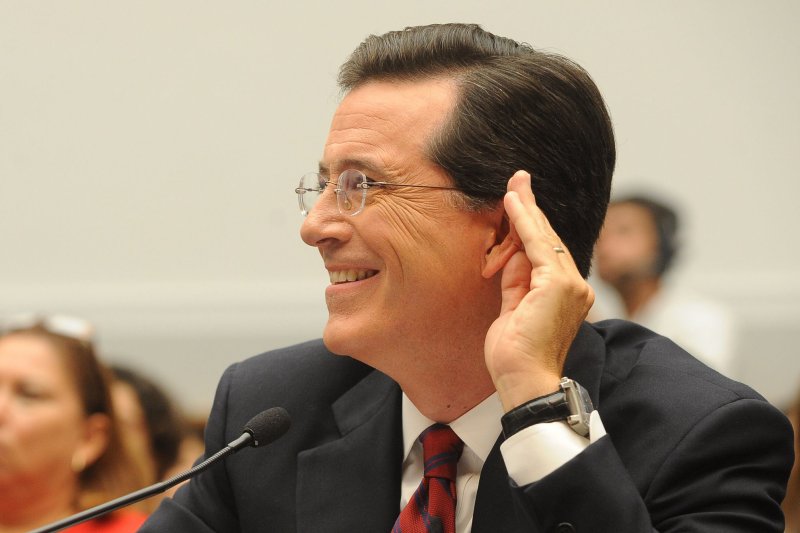 Stephen Colbert, host of The Colbert Report on Comedy Central, testifies before a House Judiciary Committee Immigration, Citizenship, Refugees, Border Security, and International Law Subcommittee hearing regarding migrant farm workers and the agricultural industry on Capitol Hill in Washington on September 24, 2010. Colbert was invited to testify after he spent one farcical day as a farm laborer which he said was much harder than punditry. UPI/Roger L. Wollenberg | License Photo

The 66-year-old Letterman announced his intent to retire from the Late Show on April 3. The late night host has been with the show for over 20 years, and will most likely depart in 2015.

Rumors that Colbert might replace the host began almost immediately after Letterman's announcement. Stewart was also thought to be a potential replacement, but the 51-year-old Daily Show host says the job is not for him.

"I don't have that gear, I don't think," Stewart tells Vulture. "I just don't really have it anymore. I really like what I do, not that Stephen doesn't. But he has a real opportunity to broaden out in a way that I don't."

Stewart has nothing but good things to say about Colbert, and thinks he would make a fine replacement for Letterman.

"[Colbert] is a uniquely talented individual," the host continues. "He's wonderful in Colbert Report, but he's got gears he hasn't even shown people yet. He would be remarkable."

"He's got some skill sets that are really applicable, interviewing-wise," Stewart adds. "But also he's a really, really good actor and also an excellent improvisational comedian. He's also got great writing skills. He's got a lot of the different capacities. Being able to expand upon [those] would be exciting."

Colbert is under contract at Comedy Central until the end of 2014. Sources say the host would leave behind the conservative persona he assumes for Colbert Report if chosen to replace Letterman.

Entertainment News // 42 minutes ago
H.E.R. says 'Beauty and the Beast' special will be 'beautiful celebration'
Dec. 9 (UPI) -- H.E.R. teased the "Beauty and the Beast: A 30th Celebration" special and gave an impromptu performance of the film's theme song on "The Tonight Show starring Jimmy Fallon."

TV // 1 hour ago
Trevor Noah departs 'The Daily Show': 'It's been a wild ride'
Dec. 9 (UPI) -- Trevor Noah signed off of "The Daily Show" after seven years. He will begin his "Off the Record" tour in January.

Entertainment News // 20 hours ago
Danny Trejo loves being actor, but really wants to help his fellow man
NEW YORK, Dec. 8 (UPI) -- Danny Trejo's path to becoming one of Hollywood's busiest and most beloved actors wasn't a straight or easy one.
Advertisement