"You got the moves. I'll give you that"

Christopher Walken is not only an actor but a trained dancer and in honor of his amazing skills, Huffington Post decided to create an amazing supercut video of him dancing through his movies.

Walken was trained in musical theater dance at Washington Dance Studio before becoming a film star and this mashup shows just how many times he's shown off his impressive skills during his career. The mashup is set to the tune of "Everybody Dance Now" by C & C Music Factory. Here is the list of movies used in the video, courtesy of the Huffington Post:

Entertainment News // 10 minutes ago
Lina Wertmuller, filmmaker known for 'Seven Beauties,' dead at 93
Dec. 9 (UPI) -- Italian Filmmaker Lina Wertmüller, who was the first woman to be nominated for Best Director at the Oscars, has died at the age of 93. 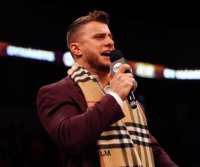