'Of Mice and Men,' 'Aladdin,' 'Les Mis' light up Broadway this season 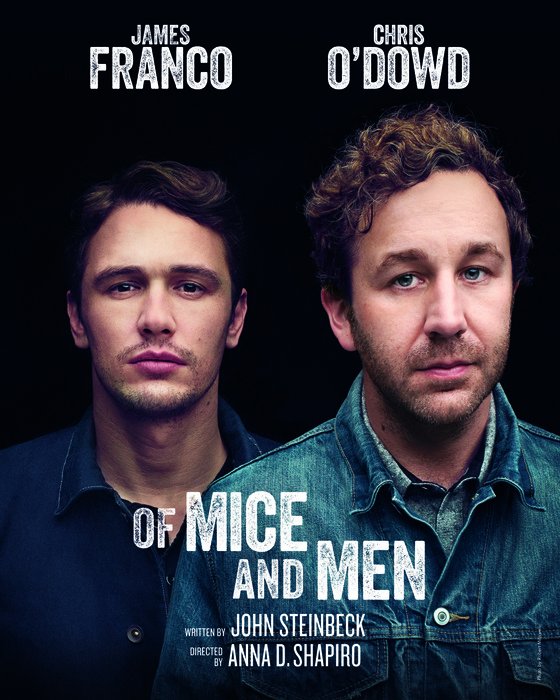 Actor Daniel Radcliffe arrives on the red carpet at the 85th Academy Awards at the Hollywood and Highlands Center in the Hollywood section of Los Angeles on February 24, 2013. UPI/Jim Ruymen | License Photo

Image courtesy of The Publicity Office.

NEW YORK, March 5 (UPI) -- Stage adaptations of beloved movies and literary classics are trending on Broadway this season, with productions of "Rocky," "The Bridges of Madison County," "Bullets Over Broadway," "Of Mice and Men," "Aladdin" and "A Raisin in the Sun" included in the stellar lineup of shows.

Also opening on the Great White Way are eagerly awaited revivals of the musicals "Cabaret" and "Les Miserables," the new play "All the Way" and the musical "If/Then."

Here are some highlights --

-- "Aladdin the Musical," the Broadway version of the 1992 animated movie, began previews at the New Amsterdam Theatre Feb. 26, with an opening day set for March 20.

The "Arabian Nights"-inspired fairy tale stars Adam Jacobs in the title role, Courtney Reed as Princess Jasmine and James Monroe Iglehart as Genie. Jonathan Freeman, who lent his voice to the villain Jafar in the movie, plays the character in the stage musical, as well.

-- "All the Way," Robert Schenkkan's new play, casts "Breaking Bad" award winner Bryan Cranston as U.S. President Lyndon B. Johnson. It is now in previews at The Neil Simon Theatre.

Co-starring Michael McKean as J. Edgar Hoover and Brandon J. Dirden as Martin Luther King, Jr., the show is scheduled to play a limited engagement on Broadway, with opening night set for Thursday. It is directed by Bill Rauch, artistic director of the Oregon Shakespeare Festival.

"'All the Way is a gripping new play about a pivotal moment in American history," a synopsis said. "This drama will take audiences behind the doors of the Oval Office and inside the first years of Lyndon B. Johnson's presidency, and his fight to pass a landmark civil rights bill."

-- Directed by Bartlett Sher, the romantic new musical "The Bridges of Madison County" stars Kelli O'Hara, Hunter Foster and Steven Pasquale, and opened Feb. 20 at the Gerald B. Schoenfeld Theatre. Based on the book by Robert James Waller and featuring music and lyrics by Jason Robert Brown, the show is about an Italian war bride living in 1960s Iowa when she unexpectedly falls in love with a handsome stranger she meets by chance while her husband and teenage children are away for a few days.

Braff is known for his lead role on the sitcom "Scrubs," as well as for writing, directing and starring in the film "Garden State."

In "Bullets," he will play David Shayne, a scribe whose play will be performed thanks to the wealthy gangster who wants to produce it as a vehicle for his girlfriend.

Preview performances are to begin March 11 and opening night is set for April 10 at the St. James Theatre.

Director Mendes and co-director/choreographer Marshall will recreate their Tony-nominated direction and choreography from the 1998 Tony Award-winning production of the show, which is set in a 1930s-era Berlin nightclub. "Cabaret" will play a 24-week limited engagement, beginning previews March 21. It is to open officially April 24 at the Kit Kat Klub at Studio 54.

-- The Michael Grandage Company's production of "The Cripple of Inishmaan" is to open on Broadway April 20.

Directed by Grandage and written by Martin McDonagh, the play will begin previews April 12 at the Cort Theatre.

Featuring a West End cast led by Daniel Radcliffe, the production will play a strictly limited run through July 20.

"Set on the remote island of Inishmaan off the west coast of Ireland, word arrives that a Hollywood film is being made on the neighboring island of Inishmore," a synopsis said. "The one person who wants to be in the film more than anybody is young Cripple Billy, if only to break away from the bitter tedium of his daily life. Martin McDonagh's comic masterpiece examines an ordinary coming of age in extraordinary circumstances and confirms his position as one of the most original Irish voices to emerge in the second half of the 20th century."

Radcliffe is best known for his work in the Harry Potter film franchise. His Broadway stage credits include "Equus" and "How to Succeed in Business Without Really Trying."

-- "How I Met Your Mother" scene-stealer and popular awards show host Neil Patrick Harris will return to Broadway this spring for the first time in nine years in a new staging of the musical "Hedwig and the Angry Inch."

With text by John Cameron Mitchell and music and lyrics by Stephen Trask, the show is to be directed by Michael Mayer. The production is set to open April 22 at Manhattan's Belasco Theatre, with previews beginning March 29.

"'Internationally ignored song stylist' Hedwig Robinson brings her fourth-wall-smashing rock 'n' roll saga to New York to set the record straight about her life, her loves and the botched operation that left her with that 'angry inch,'" a synopsis said.

The musical about an East German transgender singer got its start off-, off-Broadway in 1998 and has since become a cult favorite.

The 2014 production will mark its premiere on the Great White Way and Harris' first appearance on Broadway since he starred in the Tony-winning revival of "Assassins." His other Broadway credits include "Proof" and "Cabaret."

"IF/THEN" is being produced by David Stone, who produced both "Wicked" and "Next to Normal." A synopsis described "IF/THEN" as an original new musical "set at the intersection of choice and chance, where the road you take meets the road you didn't."

The newly re-imagined production brings the musical home to Broadway after being met with success and acclaim in productions around the world. Having originally premiered in the United Kingdom in 2009, the latest version inspired filmmakers to make the recent Oscar, Golden Globe and BAFTA-winning movie.

Set in 19th century France, the story of poverty, forgiveness and redemption follows Jean Valjean after he is freed from 19 years of slavery for having stolen a loaf of bread to feed his starving nephew. He breaks his parole by not checking in with authorities, prompting Javert to hunt him down for the rest of his life. Now free and with the help of a merciful priest, Valjean reinvents himself as an honest, small-town mayor who helps others whenever he can even when doing so puts him at risk for being caught and sent back to prison.

Fantine works in his factory until she has an altercation with some of the other women and gets fired for being a troublemaker. Valjean is too distracted by the arrival of Javert to aid her at the time and she is forced to sell her hair and teeth and become a prostitute to pay the unscrupulous Thenadiers to continue caring for her young daughter Cosette, alongside their own daughter Eponine, at their inn. Moved by the dying Fantine's story, Valjean vows to raise Cosette as his own, which he does, all the while dodging Javert. Cosette grows up, adored by Valjean but isolated until she meets by chance and falls in love with revolutionary Marius, who has also stolen Eponine's heart.

-- James Franco and Chris O'Dowd are to make their Broadway debuts in a staging of a play based on John Steinbeck's 1937 book.

"Adapted from his own classic novel, John Steinbeck's 'Of Mice and Men' is an essential adventure, an inspirational portrait of the American spirit and a heartbreaking testament to the bonds of friendship," a synopsis said. "'Of Mice and Men' tells the story of George and Lennie, an unlikely pair of friends drifting from job to job across the farms and fields of California, holding fast to their dream of one day having an acre of land they can call their own."

Previews are to begin at the Longacre Theatre March 19. Opening night is set for April 16 and the limited engagement will run through July 27.

Anna D. Shapiro is directing the drama, which has not been seen on Broadway in 40 years.

-- LaTanya Richardson Jackson is to play Lena opposite Denzel Washington as Walter Lee Younger in the upcoming Broadway revival of "A Raisin in the Sun." Kenny Leon's production of Lorraine Hansberry's Chicago family drama is to begin performances Saturday at the Ethel Barrymore Theatre -- where the original production opened 55 years ago -- and opening night is set for April 3. Co-starring Sophie Okonedo and Anika Noni Rose, the 14-week limited engagement is scheduled to run through June 15.

Washington won a Tony Award for his last Broadway appearance in "Fences," which was also helmed by Leon.

-- The Philadelphia-set, boxing-themed musical "Rocky" is in previews now and set to open March 13.

The stage adaptation of the 1976 movie is being directed by Alex Timbers and features a book written by Thomas Meehan and Sylvester Stallone, the author and star of the original "Rocky," as well as its five sequels.

Stallone also serves as a producer on the musical, which includes songs by Lynn Ahrens and Stephen Flaherty. The show stars Andy Karl as the titular pugilist and Margo Seibert as his shy girlfriend Adrian.

"Both an adrenaline-infused spectacle and a surprising tale of blossoming romance between two lonely outsiders, 'Rocky' is a visceral and heart-stopping theatrical experience for everyone brave enough to follow their dream," a synopsis said.

-- Australian stage and screen star Hugh Jackman is to serve as host of the Tony Awards ceremony in New York for a fourth time.

The prizes for the year's best on Broadway are to be given out June 8 at Radio City Music Hall.

Jackman previously served as host from 2003-05 and earned an Emmy Award for his 2004 duties at the 58th annual ceremony.

"We are thrilled to have Hugh Jackman return to host the Tony Awards," Jack Sussman, executive vice president of specials, music and live events for CBS Entertainment, said in a statement.

"Hugh is the ultimate performer -- actor, singer and dancer -- he does it all, second to none. He is a consummate entertainer and the one you want out there hosting your live television event."