Lansbury and Martin, along with costume designer Piero Tosi, accepted career-honoring awards, while Jolie was presented with the Jean Hersholt Humanitarian Award Saturday at the Hollywood & Highland Center, The Hollywood Reporter said.

Jolie, who previously won the best supporting Oscar for her role in "Girl, Interrupted," was the youngest recipient of the Hersholt award at age 38. In attendance at the ceremony was husband Brad Pitt and son Maddox, to whom she spoke during her acceptance speech.

A video cited her work with refugees and advocacy against sexual violence as evidence of why she was chosen to receive the award, The Hollywood Reporter said.

Movies // 50 minutes ago
Sundance movie review: 'Girl Picture' captivates with Finnish coming-of-age tale
LOS ANGELES, Jan. 28 (UPI) -- The Finnish drama "Girl Picture," which premiered virtually at the Sundance Film Festival, shows that Finnish teenagers are just like us. Their story is heartwarming, heartbreaking and compelling all the same. 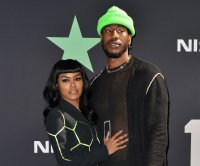 Music // 4 hours ago
Lizzo plays her song 'Special' for her mom in new video
Jan. 28 (UPI) -- Lizzo shared a sweet video with her mom after her song "Special" made its debut in a Logitech ad campaign.