A spokesman for the government of Anambra state in southeastern Nigeria confirmed Achebe had died, the BBC reported Friday.

There was no immediate word on the cause of the celebrated writer's death or his location.

South African writer and Nobel laureate Nadine Gordimer has described Achebe as the "father of modern African literature" and he was awarded the Man Booker International Prize for his body of work in 2007, the BBC said.

The writer and academic was paralyzed from the waist down and confined to a wheelchair after a 1990 car crash.

The Bon Jovi front man opened up about the harrowing experience in November during an interview airing on Friday's edition of "Katie."

"She's doing great and I appreciate everyone's thoughts and prayers, [but] in short, that problem is much more prevalent ... than I knew and I cannot get over how many people I've met that have said, 'My son, my daughter," the musician said.

"There is a lot of pressure on kids these days. There's access to things my generation didn't have. ... I'm just blessed she's healthy and whole, and we'll get through it."

Harper to guest star on 'Hot in Cleveland'

Moore, Leachman and Harper will guest star on an episode of the show, which is set to shoot April 5, Deadline said. The actresses are to play former bowling buddies who reunite years after an epic falling-out.

No air date has been confirmed.

Harper, 73, recently announced she has been diagnosed with terminal brain cancer and is only expected to live for a few more months.

Jolley sang Heart's "Alone" Thursday night in his attempt to get the judges to use their single save option of the season to let him stay, but it didn't work. 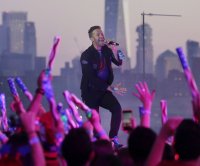