"I can confirm that Kate Winslet married Ned Rock'nRoll in NY earlier this month in a private ceremony attended by her two children and a very few friends and family," Winslet's representative told the entertainment magazine in an email message Wednesday. "The couple had been engaged since the summer."

People.com said British media reports indicated "Titanic" co-star Leonardo DiCaprio gave Winslet away in the clandestine ceremony that was kept secret even from the newlyweds' parents.

Winslet, 37, previously had been married to Sam Mendes and Jim Threapleton.

The "Black Swan" actress secured her No. 1 ranking by bringing in $42.70 at the box office for every dollar she is paid.

Coming in at No. 2 on the list is Kristen Stewart, followed by Shia LaBeouf at No. 3, Robert Pattinson at No. 4 and Daniel Radcliffe at No. 5.

Stewart, Pattinson and Lautner are the stars of the "Twilight" film franchise.

"They are thrilled and happy and Brandy feels this is so right," an insider told the celebrity magazine.

The former Moesha star has a 10-year-old daughter, Sy'rai, with her ex-boyfriend Robert Smith, but has never been married.

UsMagazine.com did not say when she and Press plan to tie the knot.

BROOKLINE, Mass., Dec. 27 (UPI) -- Massachusetts novelist Dennis Lehane has offered to name a character after whoever helps him recover his lost beagle, Tessa.

The author of "Gone Baby Gone," "Shutter Island" and "Mystic River" posted the reward offer on his Facebook page.

Lehane said Tessa is micro-chipped, but wasn't wearing her tags when she jumped the fence at his Brookline home Monday. 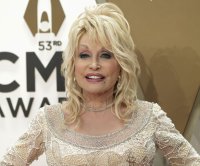 TV // 7 hours ago
Anne Rice's 'The Mayfair Witches' coming to AMC in 2022
Dec. 1 (UPI) -- AMC announced Wednesday that it has greenlit a series based on Anne Rice's "The Mayfair Witches." This is the second series in AMC's Rice universe after their "Interview with the Vampire" adaptation.