Actress Lindsay Lohan appears in court with her attorney Shawn Chapman Holley, as she pleads not guilty to a grand theft charge of stealing a $2,500 necklace from a jewelry store, in Los Angeles on February 9, 2011. Lohan is accused of walking out of a Los Angeles jewelry store without paying for a gold designer necklace in January -- just three weeks after ending her fifth stint in drug and alcohol rehab in three years. UPI/Mario Anzuoni/Pool | License Photo

LINDSAY LOHAN: A judge has revoked U.S. actress Lindsay Lohan's probation and set bail at $40,000 after she was charged with felony grand theft of a $2,500 necklace.

Lohan "was smiling at times and even laughing," a witness told the magazine's Web site.

Los Angeles Superior Court Judge Keith Schwartz set bail at $40,000 -- $20,000 for the theft charge in the necklace incident, and another $20,000 for the possible violation of probation.

"You're in a different situation now that a felony has been filed against you. Although people have been courteous, in this court's opinion, in only requesting $20,000 in the probation violation, you now have a pending felony case. If you violate the law, I will remand you and set no bail," Schwartz told Lohan.

"I honestly feel I did nothing wrong," celebrity news Web site TMZ.com quoted Lohan as telling friends this week. She denies stealing the gold necklace with semiprecious stones from the Kamofie & Co. jewelry store in Venice, Calif.

The actress, who began her career as a child fashion model before making her motion-picture debut at age 11 in the 1998 remake of "The Parent Trap," allegedly walked out of the store with the necklace Jan. 22, the district attorney's office said.

A friend of Lohan's later brought the necklace to a police station.

Lohan reportedly said the store had loaned the necklace to her and her assistant returned it to police, ABC News reported.

Lohan is on supervised probation in a 2007 misdemeanor case involving driving under the influence.

If convicted, Lohan -- star of the films "Freaky Friday," "Mean Girls" and "Herbie: Fully Loaded" -- could go to California state prison for up to three years.

KEVIN SMITH: U.S. filmmaker Kevin Smith, kicked off a Southwest Airlines flight a year ago because of his size, says he has lost 65 pounds.

"I feel mixed feelings about losing the weight," The Hollywood Reporter said Smith told HLN Tuesday. "I sympathize far more with heavier people than I ever will with thin. I'll never be thin. Let's be honest, I've lost 65 pounds, but nobody's going, 'I wanna sleep with you!' They're just like, 'Keep going, you look better.'"

The writer-director did not say how much he weighed before he dropped the 65 pounds.

TISHA CAMPBELL-MARTIN: U.S. television star Tisha Campbell-Martin says she is being treated for sarcoidosis, but is not dying of the lung disease as some media reports suggested.

The mother of two and 42-year-old actress -- whose small-screen credits include "Martin," "My Wife and Kids," "Everybody Hates Chris" and "Rita Rocks" -- said she was diagnosed with sarcoidosis about 10 years ago.

"Thank you, everyone, for your concern," Campbell-Martin said in a statement issued to People.com Wednesday.

"However, no worry is needed," she said. "I was diagnosed with a lung disorder that some people walk around with and don't even know they have. Through early diagnosis I'm happy to share that I stay healthy with diet and exercise."

Campbell-Martin will soon be seen in the Lifetime police drama "Exit 19."

ASHLEE SIMPSON-WENTZ: U.S. singers Ashlee Simpson-Wentz and Pete Wentz have confirmed they are divorcing after nearly three years of marriage.

The couple started dating in 2006 and are the parents of a 2-year-old son.

"We remain friends and deeply committed and loving parents to our son Bronx, whose happiness and well-being remains our No. 1 priority," Simpson-Wentz and Wentz said in a joint statement Wednesday.

"Ashlee loves Bronx but jumped into marriage and having a baby too quickly," one source told UsMagazine.com. "They feel they got trapped in a situation they were too young for."

Music // 11 hours ago
Pentagon pose, play pool in 'Feelin' Like' music video teaser
Jan. 19 (UPI) -- K-pop group Pentagon shared a preview of its video for "Feelin' Like," the title track from its EP "In:vite U."

Entertainment News // 11 hours ago
Cardi B to cover funeral costs for victims of Bronx fire
Jan. 19 (UPI) -- Cardi B has announced plans to pay the funeral and burial costs of those who died in a recent apartment building fire in the Bronx borough of New York City. 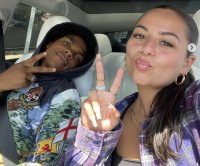