Reiner, 87, is a 12-time Emmy Award winner who has written, directed or starred in "The Dick Van Dyke Show," "The Jerk," "Dead Men Don't Wear Plaid" and the "Ocean's Eleven" trilogy.

His work, "Just Desserts: A Novellah," is described in a news release as "a funny story of successful romance novelist Nat Noland who has just had his cage severely rattled. Noland decides to e-mail God with a list of suggestions. And he gets a reply."

It is to be published Sept. 1.

Reiner has also written "Tell Me Another Scary Story ... But Not Too Scary," a sequel to his 2003 children's book, "Tell Me a Scary Story." The sequel, which includes a CD featuring Reiner reading the tale, will be available Sept. 29.

TV // 8 hours ago
The CW's new fall season begins in October
June 15 (UPI) -- The CW announced premiere dates for its Fall 2021 schedule throughout October and November.

Music // 13 hours ago
Seventeen shares 'Ready to Love' music video teaser
June 15 (UPI) -- K-pop group Seventeen released a preview of its video for "Ready to Love," the title track from its EP "Your Choice."

Entertainment News // 19 hours ago
Nintendo announces 2D 'Metroid,' showcases 'Breath of the Wild 2' at E3
June 15 (UPI) -- Nintendo held its annual E3 Direct presentation on Tuesday where it announced a new 2D "Metroid" game and provided a new trailer for "The Legend of Zelda: Breath of the Wild 2." 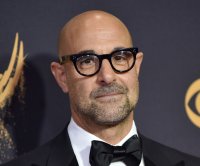