John Lennon and his wife Yoko Ono listen in on the Watergate hearings on Capitol Hill in this 1973 UPI file photo. | License Photo

ROME, Nov. 23 (UPI) -- A Vatican publication says the late British rocker John Lennon is off the hook for once saying the Beatles beat Jesus Christ in popularity.

The Sunday Times of London reported an editorial in the Vatican's official newspaper, L'Osservatore Romano, absolved the Beatles rocker for his March 1966 comment.

"We're more popular than Jesus now -- I don't know which will go first, rock 'n' roll or Christianity," Lennon said at the time. "Jesus was all right, but his disciples were thick and ordinary. It's them twisting it that ruins it for me."

The comment from Lennon, who was fatally shot in 1980, not only resulted in condemnation by the Vatican but also death threats and record burnings targeting the Beatles.

The Times said the Vatican newspaper's comments on the matter came just as Lennon's former Beatles partner, Paul McCartney, spoke out about Lennon's drug use.

"A lot of people started on heroin because John did," McCartney told The Times magazine. "We didn't know the dangers of overindulgence. The problems of cannabis have escalated and it really is more dangerous." 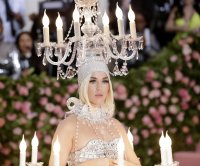