McCready not proud of Clemens affair

NEW YORK, Nov. 17 (UPI) -- U.S. singer Mindy McCready, who was released from jail two weeks ago, says she isn't proud of an affair she had with baseball great Roger Clemens.

McCready, 32, has battled addiction to prescription drugs and recently spent time behind bars for violating her probation following a drug arrest.

"There aren't words to describe how painful it's been. So painful, I haven't wanted to live," she told TV's "Inside Edition." "I've lived recklessly. I've made a lot of mistakes."

McCready also revealed one of her biggest errors was having an affair with the married baseball player. This marks the first time she has publicly spoken about the relationship, "Inside Edition" said, noting Clemens has denied an affair happened.

"Carrying on a relationship with him is not something I'm proud of," McCready said, adding she met Clemens when she was 16 but didn't have sex with him until several years later. "Roger Clemens is one of the most wonderful men I've ever known … . He treated me like a princess."

The country singer went on to say she and Clemens didn't sneak around while they were dating.

"We went on vacations together," she said.

The singer revealed she broke off the nearly decade-long relationship because Clemens wouldn't marry her.

She also said she now has "nothing but remorse and nothing but sympathy for what (his wife Debbie) had to go through with this situation, and she has my utmost apology." 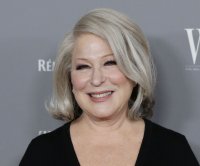 Movies // 3 hours ago
Michael Urie: 'Single All the Way' is 'a regular old rom-com'
LOS ANGELES, Dec. 1 (UPI) -- Michael Urie discusses his Netflix movie "Single All the Way," out Thursday, in which he plays a gay man falling for his platonic friend over the holidays.

Movies // 15 hours ago
What's coming to Redbox in December
Nov. 30 (UPI) -- Big films like "Dear Evan Hansen," "Venom: Let There Be Carnage," "The Many Saints of Newark" and "The Mitchells vs. The Machines" are coming soon to Redbox.

TV // 15 hours ago
'And Just Like That...' trailer addresses dating apps, public sex
Nov. 30 (UPI) -- HBO Max released the full trailer for the "Sex and the City" revival "And Just Like That..." on Tuesday. The trailer shows Sarah Jessica Parker, Kristin Davis and Cynthia Nixon face new relationship issues.