"The family of Richard Wright, founder member of Pink Floyd, announce with great sadness that Richard died today after a short struggle with cancer," Wright's spokesman told Rolling Stone magazine. "The family have asked that their privacy is respected at this difficult time."

Wright was one of the rock band's original members, along with the late Syd Barrett, Roger Waters and Nick Mason.

The London-born musician played with the group until a falling out with Waters after "The Wall" in 1979. Wright later rejoined the band when David Gilmour took over after Waters departed in the early 1980s.

Wright also played with the band when it reunited in 2005 for the Live 8 concert in London and had recently performed with David Gilmour on his solo tour, Rolling Stone said.

NME.com noted Wright worked on all but one of the band's 14 studio releases, including "The Dark Side Of The Moon" in 1973.

"He was such a lovely, gentle, genuine man and will be missed terribly by so many who loved him," the BBC said Gilmour wrote on his Web site. "And that's a lot of people. Did he not get the loudest, longest round of applause at the end of every show in 2006?"

Wright is survived by his wife Millie and three children, NME.com said.

TV // 10 hours ago
Alyssa Milano says Tony Danza will take care of her kids in new 'Who's the Boss?'
Oct. 27 (UPI) -- Alyssa Milano discussed the in-development reboot of "Who's the Boss?" and what fans can expect to see on the series while appearing on "The Drew Barrymore Show" on Wednesday.

Music // 11 hours ago
Seventeen to hold 'Power of Love' online concert in November
Oct. 27 (UPI) -- K-pop group Seventeen will perform songs from "Your Choice" and "Attaca" during two shows in November. 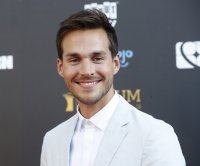