LONDON, Aug. 4 (UPI) -- British actress Julie Walters says she was working on her autobiography when she recalled being sexually abused when she was a child.

The BBC said the 58-year-old actress, who has appeared in "Calendar Girls," "Mamma Mia!" and the "Harry Potter" films, is finishing up her memoirs, which are to be published in October.

Walters told The Daily Mirror she was sexually assaulted when she was 10 by a man who tried to abduct her and her friends. The BBC quoted her as saying she kept the incident from her mother for 25 years.

"He touched me. It was nothing horrific but it could have been," The Mirror quoted Walters as saying. "Writing about the incident made me feel sick. As an adult you look back at all the details you didn't understand then. Now I know what he wanted -- it's frightening. It was the start of a sexual assault. There were three of us, and you'd think there'd have been safety in numbers. But we were so frightened of him we'd have done anything."

The actress said she and her friends were able to escape after they caught the attention of some people at a nearby bus stop.

TV // 10 hours ago
Daryl, Carol survey devastation, prepare to fight in 'Walking Dead' S11 teaser
July 25 (UPI) -- AMC has released a 1-minute preview for the 11th and final season of its zombie-apocalypse drama, "The Walking Dead." 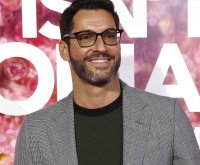 Entertainment News // 14 hours ago
J. Lo goes Instagram official with Ben Affleck on her 52nd birthday
July 25 (UPI) -- Jennifer Lopez shared on Instagram photos and video of her enjoying her 52nd birthday aboard a yacht somewhere on the ocean.