"Ms. Taylor is fine," Taylor's publicist, Dick Guttman said. "The rumors which began in England about her health are dramatic, overstated and untrue."

But Guttman told People magazine her recent trip to the hospital "was precautionary" and insisted she is set to return home soon.

"At present, she is surrounded by family, friends and fabulous jewels," Guttman said. 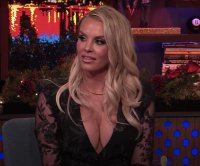