LOS ANGELES, July 22 (UPI) -- Robert Downey Jr. is earning praise for his portrayal of a white actor who plays an African-American character in the movie within a movie in "Tropic Thunder."

"To be honest, he played a black dude better than anybody I've seen," Downey's African-American "Tropic Thunder" co-star Brandon T. Jackson told People.com. "When I first read the script, I was like: What? Black face? But when I saw (Downey act) he, like, became a black man."

Directed by Ben Stiller and co-starring Jack Black, the big-screen comedy features Downey as an Oscar-winning actor who takes on a role in the most expensive Vietnam war movie in cinematic history, then dyes his skin when he hears his character was originally written as an African-American.

"It was just good acting," Jackson told People.com. "It was weird on the set because he would keep going with the character. He's a Method actor." 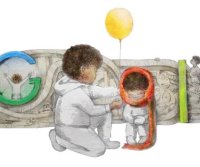 TV // 16 hours ago
'Cat People' joins 'Dogs' Season 2 on Netflix
June 14 (UPI) -- Netflix released trailers for Season 2 of "Dogs" and the debut of "Cat People," its docuseries about dog and cat owners, respectively.