Dylan -- whose song "The Times They Are a-Changin'" helped define political protest in the '60s -- said the Illinois senator is "redefining the nature of politics from the ground up."

Dylan made the comments in an interview in Denmark, during a tour of Scandinavia, the newspaper said.

"Well, you know right now America is in a state of upheaval. Poverty is demoralizing. You can't expect people to have the virtue of purity when they are poor," Dylan said.

"But we've got this guy out there now who is redefining the nature of politics from the ground up ... Barack Obama.

"He's redefining what a politician is, so we'll have to see how things play out," Dylan said.

The 67-year-old Dylan said he was "hopeful that things might change. Some things are going to have to."

Obama Tuesday secured enough delegates to the Democratic nominating convention to assure he will be the party's presidential nominee in the general election.

Movies // 16 hours ago
Idris Elba in trouble for hurting Superman in new 'Suicide Squad' trailer
June 22 (UPI) -- Warner Bros. released a new trailer for "The Suicide Squad" on Tuesday. The film opens Aug. 6 in theaters and on HBO Max. 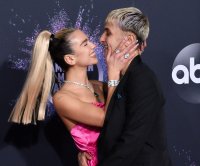