"This show will draw our favorite celebrities out of their comfort zone and into a stunning and magical circus environment that allows them to showcase their unseen skills," NBC's Craig Plestis said in a statement. "It's a fresh concept from our friends at Endemol and is unlike anything else currently in the TV landscape."

"We are extremely excited to be bringing this show to American audiences," said David Goldberg, president of Endemol USA, which also produces NBC's smash hit game show "Deal or No Deal."

"Every week ('Celebrity Circus') will bring big thrills and bigger entertainment to our audience who can look forward to some very adventurous television," Goldberg said.

The competition reality series is currently being sold around the world and has had successful launches in Portugal and Argentina, NBC said.

Movies // 1 hour ago
Sundance movie review: 'You Won't Be Alone' will make you wish you were
LOS ANGELES, Jan. 24 (UPI) -- "You Won't Be Alone" is a Macedonian arthouse horror movie, so it was bound to be divisive anyway. If it doesn't work for you, boy is it a chore.

Movies // 2 hours ago
Sundance movie review: 'Cha Cha Real Smooth' is the best of the fest so far
LOS ANGELES, Jan. 24 (UPI) -- Writer/director/star Cooper Raiff's "Cha Cha Real Smooth" harkens back to the indie comedies that thrived at Sundance in the '90s, and establishes Raiff as a major talent.

TV // 15 hours ago
Kristen Wiig, Willem Dafoe interrupt Will Forte's first 'SNL' guest host monologue
Jan. 23 (UPI) -- Will Forte joked that "Saturday Night Live" was just saving the best for last by waiting to invite him to guest host for the first time, 12 years after he left as a cast member. 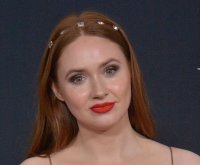 Movies // 18 hours ago
Karen Gillan: Sundance clone movie 'Dual' was 'like being on Avengers'
LOS ANGELES Jan. 23 (UPI) -- Karen Gillan, co-stars Aaron Paul and Beulah Koale and writer/director Riley Stearns discuss their Sundance movie "Dual." Gillan plays a woman and her clone in a process she compared favorably to her Marvel movies.