HOLLYWOOD, Oct. 9 (UPI) -- U.S. actor Elliott Gould, who plays the voice of God in the upcoming animated film, "The Ten Commandments," says he thinks the guidelines are still relevant.

The film's Oct. 19 opening ties into a recent statistical survey ordered by The Ten Commandment Commission and an online campaign created to heighten awareness of the societal principles, said Promenade Pictures, which produced and will distribute the film.

The survey showed respondents know more about Big Mac ingredients and "The Brady Bunch" than they do about the Ten Commandments.

"Well, I'm a father and a grandfather, and I'm older now and recognize my own mortality. I have acquired some degree of perspective and focus in my existence and I believe it's so significant," Gould said. "I am concerned like most of us, about the situation in the Middle East and different perspectives, and I would hope that to renew, restore and strengthen our resolve in relation to ethics and morals can help to pave the way to make for peace and harmony in the world amongst all of us."

"The Ten Commandants" movie features the voice talent of Ben Kingsley as the narrator, Christian Slater as Moses and Alfred Molina as Ramses. 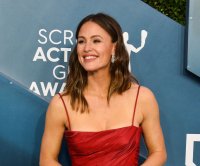 Music // 16 hours ago
ACM Awards: How to watch, what to expect
April 16 (UPI) -- The 56th annual Academy of Country Music Awards is taking place Sunday on CBS.

Entertainment News // 17 hours ago
TXT performs 'We Lost the Summer' on 'Ellen'
April 16 (UPI) -- K-pop group TXT performed on "The Ellen DeGeneres Show" and also appeared in a behind-the-scenes video about the performance.

TV // 19 hours ago
Vanessa Morgan returns to 'Riverdale' set with baby boy in tow
April 16 (UPI) -- Vanessa Morgan, who plays Toni Topaz on "Riverdale," brought her infant son, River, with her to the set of the CW series.