Kingsley to play Shakespeare in 'Will'

LOS ANGELES, Sept. 22 (UPI) -- British actor Ben Kingsley will take on the role of famed writer William Shakespeare in the film "Will," due out from his own SBK Pictures studio.

Originally written by author Christopher Rush, "Will" follows an ailing Shakespeare as he has a fictional meeting with his lawyer regarding the details of his last will and testament, The Hollywood Reporter said Saturday.

The "Gandhi" star said he was immediately struck by "Will" and said he is honored to be able to work on the production with his partners, Valerie Hoffman and Simone Sheffield.

"Christopher wrote the most amazing, literate and entertaining novel I've read in years, and I'm both honored and excited to be part of bringing 'Will' to life," Kingsley said.

The Reporter said the film, that will mark SBK Pictures' first production, will begin filming in Britain sometime next year. 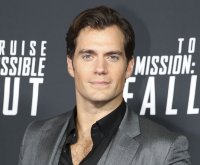