EDINBURGH, Scotland, July 21 (UPI) -- The seventh and final Harry Potter book, "Harry Potter and the Deathly Hallows," is being called the fastest-selling book ever in Scotland.

The book went on sale at midnight Friday and already has reached the 2.2 million sales mark on Amazon.com, the highest yet for any of the Potter books, The Scotsman reported.

Thousands of fans were lined up outside stores Friday night waiting to get what author J.K. Rowling said would be the last book in the series, in which several leading characters were expected to die.

Potter mania swept the country with the release of the book. One Australian man had to be rescued from a freezing lake after jumping in to retrieve his receipt for a pre-ordered copy and the British ambassador was expected to present the first of 10,000 pre-ordered copies in Bangkok.

In Britain, the book was even selling for as low as $10 as various supermarkets competed for young people's business.

TV // 7 hours ago
Ariana Grande takes her coach's chair in 'The Voice' Season 21 teaser
July 28 (UPI) -- Ariana Grande will serve as a coach alongside Kelly Clarkson, John Legend and Blake Shelton in "The Voice" Season 21. 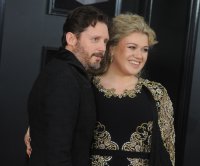