Federline, 28, told PEOPLE that from the set of the CBS show, "This is pretty much my first time acting. It's the first time I've actually had a speaking role."

He added that the offer came about quickly. "I was doing stuff for the Teen Choice Awards," he says, "and got the call while we were rehearsing. I was excited right off the bat. It's the only show that I really, really watch."

He will play a menacing, arrogant teen, PEOPLE said, who harasses investigators Nick Stokes (George Eads) and Warrick Brown (Gary Dourdan) on a job; the episode is tentatively scheduled to air in October.

Federline's has primarily been known as the husband of singer Britney Spears. 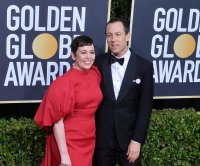 Movies // 8 hours ago
'Shang-Chi' tops North American box office for a 3rd weekend
Sept. 19 (UPI) -- "Shang-Chi and the Legend of the Ten Rings," is the No. 1 movie in North America for a third weekend, earning an additional $6.1 million in receipts, BoxOfficeMojo.com announced Sunday.

Entertainment News // 15 hours ago
Kaya Scodelario and Benjamin Walker expecting second child
Sept. 19 (UPI) -- The Maze Runner and Pirates of the Caribbean: Dead Men Tell No Tales actress Kaya Scodelario has announce on Instagram she is pregnant with her second child.