LOS ANGELES, Aug. 17 (UPI) -- The new Hollywood dance film "Step Up" helped form friendships among its cast, but also left some actors bruised from the its intense training.

"I did fall on my head once," said the 26-year-old Tatum. "Jenna bruised her rib doing one lift.

"We were practicing it, and I bruised her rib a little bit. You're always sore and you have bruised knees."

While Tatum -- who plays the bad boy romantic lead in the film opposite Dewan -- detailed the cast's injuries, his co-star praised the cast's ability to form friendships nonetheless.

"We had like our spots in Baltimore where all of us would get together and go eat and go dancing," said the former dancer for Justin Timberlake and Janet Jackson. "We'd actually go dancing after we were dancing all day."

TV // 7 hours ago
Amazon 'The Boys' spinoff announces cast
Sept. 27 (UPI) -- Amazon Studios greenlit its spinoff to its series 'The Boys' on Monday and announced its cast. The spinoff will be set in a college for young superheroes. 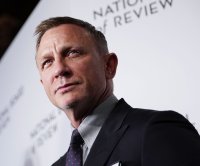