HOLLYWOOD, June 19 (UPI) -- Johnny Depp's role in "Pirates of the Caribbean: The Curse of the Black Pearl" earned him $20 million, after decades of starring in marginal Hollywood films.

But Depp's marriage and foray into fatherhood led him to make a movie that would appeal to his kids. In a visit to the Disney studio, he told chairman Dick Cook he might like to be a voice in a Pixar movie. Cook mentioned the upcoming "Pirates of the Caribbean" film and Depp got excited, Newsweek said.

"The studio was, like, 'Is he gay? Is he drunk? We don't know what he's doing!'" said producer Jerry Bruckheimer. But his odd performance was what made the movie a hit.

"It's the closest part he's ever played to his real self," said director John Waters. "First of all, Johnny is a pirate in real life," he said. 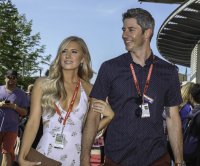