"Barbra: The Way She Is" by Christopher Anderson claims Hillary Rodham Clinton banned the singer-actress from the White House after learning Streisand stayed in the Lincoln Bedroom while the first lady was away.

Anderson, a former senior editor at People magazine, also explains Streisand's stage fright as well as her mental abuse by a cruel step-father who repeatedly called her "ugly" as a child.

A Streisand rep had no comment on the book, which hit U.S. store shelves Tuesday. 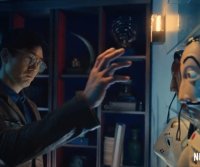