Domingo to get Classical Brit honor

LONDON, Feb. 27 (UPI) -- Tenor Placido Domingo will perform and receive a lifetime achievement award during the Classical Brits in London, it was announced Monday.

"I'm truly delighted to be honored with this very special award, and I look forward to returning to the Royal Albert Hall," Domingo, 65, was quoted as saying by the BBC.

Trumpeter Alison Balsom has also been confirmed to perform during the May 4 ceremony.

It will mark the only 2006 performance in Britain by Domingo, the general director of the Los Angeles Opera. 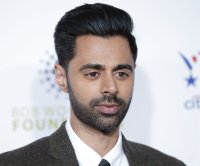 Entertainment News // 6 hours ago
Hulu: What's coming and going in October 2021
Sept. 23 (UPI) -- "Queens," every episode of "Castle," and new seasons of "Grey's Anatomy" and "The Bachelorette" and are headed to Hulu.