"I read that script," Reed told the New York Daily News. "It's one of the most disgusting, foul things I've seen -- by any illiterate retard -- in a long time. There's no limit to how low some people will go to write something to make money."

"I adore Lou Reed," the director said. "I love him for hating my project, which can only bring it more attention. But nobody is making big money on it. We're all working for scale to tell a complex story about a wonderful young woman." 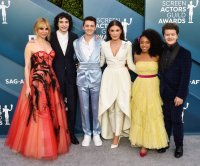 Music // 2 hours ago
Ozuna announces 2022 world tour
May 23 (UPI) -- Ozuna has announced a 38-stop world tour that will feature performances in Europe and North America.
Advertisement