NEW YORK, Nov. 14 (UPI) -- Rosie Perez may have starred in the basketball movie "White Men Can't Jump," but she doesn't want an NBA stadium in her New York neighborhood.

Perez joined in a march against the $3.5 billion plan Sunday, the New York Post reported Monday.

"I've lived here all my life and I'm glad we don't have skyscrapers," she said of her Brooklyn neighborhood.

Developer Bruce Ratner has proposed building 17 commercial and residential towers around an NBA arena in the Prospect Heights neighborhood for the New Jersey Nets. Many area property owners have settled generously with Ratner, but the state could seize land via eminent domain from anyone who won't sell, The Post said.

Perez said the project would hurt people being displaced as she participated in a walk-a-thon that raised about $50,000. 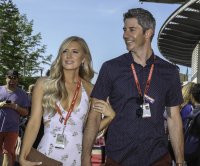