Even Bono's introduction was in the language of the evening. And Black Eyed Peas, which won an award as best international hip-hop group, opened the show with Spanish-language versions of several songs, joined by some of the Latin American artists.

The show held Thursday night is to be broadcast Oct. 30.

Julieta Venegas was the evening's big winner with three awards, while the Mexican group Café Tacuba and Maroon 5 of Los Angeles won two each. 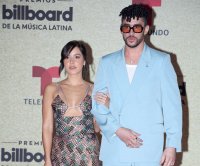 Movies // 5 hours ago
Sundance movie review: 'After Yang' is a touching exploration of attachment
LOS ANGELES, Jan. 24 (UPI) -- The sci-fi film "After Yang" explores a family's attachment to an android, and the grief with which they cope after he breaks down.