Christopher Reeve in ad for Prop 71 in Calif.

The initiative, which will appear on California's Nov. 2 statewide ballot, would authorize the issuance of $3 billion in tax-free, state general obligation bonds to provide funding for stem cell research.

The 30-second television ad features Reeve, who passed away Oct. 10 from heart failure. Reeve, paralyzed in an equestrian competition in 1995, helped motivate neuroscientists around the world to conquer the most complex diseases of the brain and central nervous system and he founded the Christopher Reeve Paralysis Foundation.

"My foundation supports cutting edge research. And we are proud ... proud supporters of Prop 71," Reeve said in the ad. "Stem cells have already cured paralysis in animals. Stem cells are the future of medicine. Please support Prop 71. And, stand up for those that can't. Thank you."

Movies // 7 hours ago
'Shang-Chi' tops the North American box office for 4th weekend
Sept. 26 (UPI) -- "Shang-Chi and the Legend of the Ten Rings" is the No. 1 movie in North America for a fourth weekend, earning an additional $13.3 million in receipts, BoxOfficeMojo.com announced Sunday. 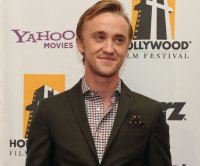