"People want to follow me around. I publish magazines, and I have a bizarre lifestyle. I can be up on stage and wear more makeup and high heels than your mommy did. And off stage I wear suits," Simmons said about others' interest in him, the New York Daily News reported Thursday.

With three shows to choose from, Simmons' says his decision will be based on the bottom line.

"...I'm no different than the (expletive) on the street corner: For the right price, I'll do it," he said.

Simmons, who already is dabbling in TV, will appear in Friday's season premiere of NBC's "Third Watch," playing a creepy man out for revenge when cops kill his son.

"It's very riveting. I find the show well-written. I did it because I was a fan of the show," Simmons said. 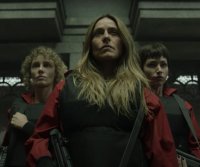 TV // 19 hours ago
'The Chi': Showtime renews drama series for Season 5
Aug. 2 (UPI) -- "The Chi," a series created by Lena Waithe and starring Jacob Latimore, Michael V. Epps and Alex Hibbert, will return for a fifth season on Showtime.
Advertisement