Reiner takes over for Ted Griffin who was fired from his top position 10 days into principal photography on the as yet untitled Warner Bros. movie, E! Online reported Thursday.

Griffin, who wrote the screenplay for the film about a woman who learns her grandmother was the basis for the real Mrs. Robinson character in the original "Graduate," was making his directorial debut.

Aniston plays the young woman and Shirley MacLaine plays the grandmother in the comedy.

Griffin, a screenwriter by trade who wrote "Ocean's Eleven" and "Matchstick Men," reportedly was let go because he was spending too little time with the actors and too much time with cinematographer Ed Lachman. 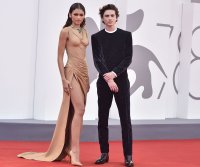