NEW YORK, May 3 (UPI) -- Wheelchair-bound actor Christopher Reeve has signed on to direct a cable TV movie about a quadriplegic who goes to Harvard University.

Reeve will also co-produce the A&E production of "Brooke Ellison," based on the true story of a girl who is paralyzed at age 11, but goes on to accomplish great things with help from her family.

Scheduled to begin shooting next month in New Orleans, the film is based on the book "Miracles Happen: One Mother, One Daughter, One Journey."

"There is an obvious personal involvement and interest in his telling the story," said Bob DeBitetto, senior vice president of programming at A&E.

Although he was paralyzed in a 1995 horse-riding accident, Reeve previously directed the acclaimed 1997 TV movie "In the Gloaming," starring Glenn Close. 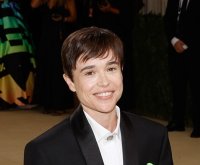 Music // 17 hours ago
Seventeen dance in new 'Rock with You' music video teaser
Oct. 20 (UPI) -- K-pop group Seventeen released a new preview of its video for "Rock with You," the title track from their EP "Attacca."