HOLLYWOOD, July 30 (UPI) -- Director Barry Sonnenfeld reportedly has opted out of the remake of "Fun with Dick and Jane."

The remake is to star Jim Carey and Cameron Diaz.

Daily Variety said Sonnenfeld left the project without comment, just six weeks ahead of the flick's scheduled production starting date. The project has been rescheduled to get off the ground next March.

The 1977 version of "Fun with Dick and Jane" starred George Segal and Jane Fonda who became robbers to pay their bills. The script was updated by writers Judd Apatow and Nick Stoller.

Producers say they still are committed to the project. 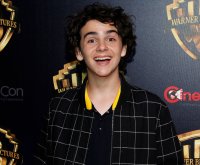 Entertainment News // 19 hours ago
What to stream this weekend: 'Luca,' 'Physical'
June 18 (UPI) -- "Luca," "Physical," "Fatherhood," "Evil" Season 2, a "Black-ish" marathon in honor of Juneteenth and "Ricky and Morty" Season 5 are some of the entertainment options streaming this weekend.