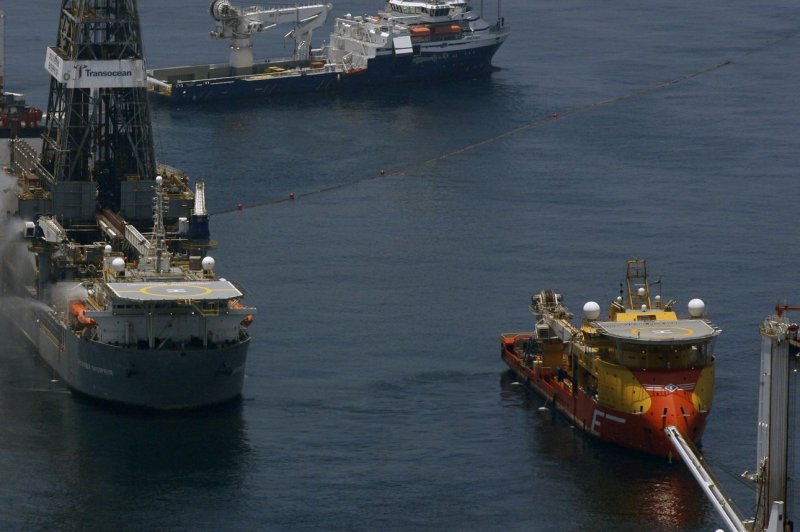 Italian energy company Eni revised the oil estimate for a basin off the coast of Mexico upward by 40 percent. File photo by A.J. Sisco/UPI | License Photo

Dec. 12 (UPI) -- Italian energy company Eni said Tuesday the results of a well off the coast of Mexico meant it could raise its oil reserve estimate by more than 40 percent.

The company said it finished drilling a well in the shallow waters in the Campeche Bay off the coast of Mexico. As a result, the company said it was able to revise its estimate for the broader region, an exploration prospect it calls Area 1, from 1.4 billion to 2 billion barrels of oil equivalent.

About 90 percent of that estimate is expected to exist as oil.

"Eni will shortly submit the development plan for Area 1 to the approval of the local authorities," the company said in a statement. "As soon as the plan of development is approved, Eni will sanction the development, with production startup planned in first half 2019."

In March, the Italian company confirmed the potential for oil offshore Mexico. CEO Claudio Descalzi said the discovery was the first for his company in Mexico and the first by a foreign company since national energy reforms were enacted in 2013.

Five months later, Talos Energy, working alongside joint venture partners Sierra Oil and Gas and Premier Oil, confirmed a discovery at the Zama-1 exploration well off the coast of Mexico. Initial estimates put the reserve potential at between 1.4 billion and 2 billion barrels of oil, which exceeded early expectations.

Mexican President Enrique Peña Nieto moved through reforms to draw private investors to the state energy sector after more than 70 years of a monopoly controlled by state-run Petroleos Mexicanos, or Pemex. The reforms could bring in up to $415 billion in investments over the next 20 years as the country establishes links to the rest of the world.

Mexico aims to produce around 3.5 million barrels per day by 2025. For Eni, the company said it's evaluating the option to put its fields there on the fast-track to development. It created its Mexican subsidiary in 2015.