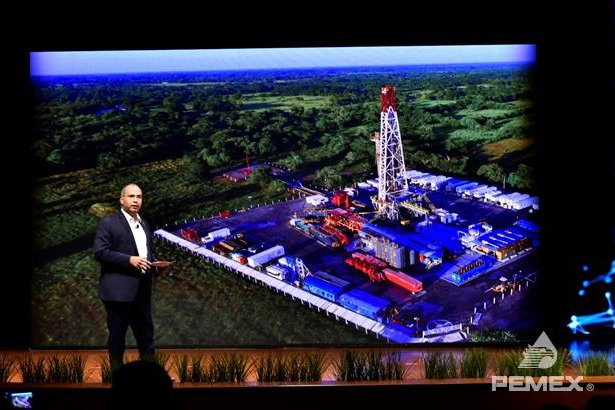 Pemex CEO Carlos Trevino on Tuesday announced what Pemex said is the biggest inland discovery in Mexico in 25 years. Photo courtesy of Pemex

Nov. 28 (UPI) -- State oil company Pemex is set to add a billion barrels of oil equivalent to reserves after discovering a gas field that, within four years, will yield 80,000 barrels per day of condensates and 700 million cubic feet per day of gas to feed petrochemical units in south Mexico.

The discovery in the Ixachi field, state of Veracruz, "is the most important made in the inland portion in the last 25 years and the fourth biggest at a worldwide level in the last decade," the company said on Tuesday.

The company said that the field, located 45 miles from the Veracruz port, was initially reported a year ago, but that it now knows after tests that it has a "bigger extension" and that its proven, probable and possible, or 3P, reserves reach 1 billion barrels.

Production can begin as soon as 2022 because the field "has the strategic advantage of being close to operating infrastructure, both in wells and in pipelines," Pemex said.

The new production will feed petrochemical complexes in the southeast of the country, Pemex CEO Carlos Trevino said.

Pemex Petroquimica, which is headquartered in Coatzacoalcos, has several production units in the area. The company makes several plastic resins, fibers, pharmaceutical components and additives for industry.

The region is also home to a plant built by a joint venture of Braskem-Idesa that opened in 2016 with capacity to produce over one million metric tons of polyethylene. Braskem, from Brazil, is the biggest Latin American petrochemical producer. Idesa Group is a privately owned Mexican company focused on oil and petrochemicals.

The Veracruz basin has helped Mexico produce hydrocarbons for over 60 years.

The announcement comes amid criticism in recent months by the Mexican President-elect Andres Manuel Lopez Obrador that Pemex had failed to make discoveries in recent years that could help stop a years-long decline in production.

Trevino is set to depart from Pemex, leaving his post to Octavio Romero, who was tapped by Obrador earlier this year and will take over after Obrador begins his term in December.

Obrador has also criticized efforts by the current Mexican administration to open up the country's hydrocarbon industry to foreign investment starting in 2013. He has pointed out that since that time output has declined.

There is uncertainty as to whether Obrador's administration could reverse earlier decisions as he has announced plans to increase state participation in the industry.