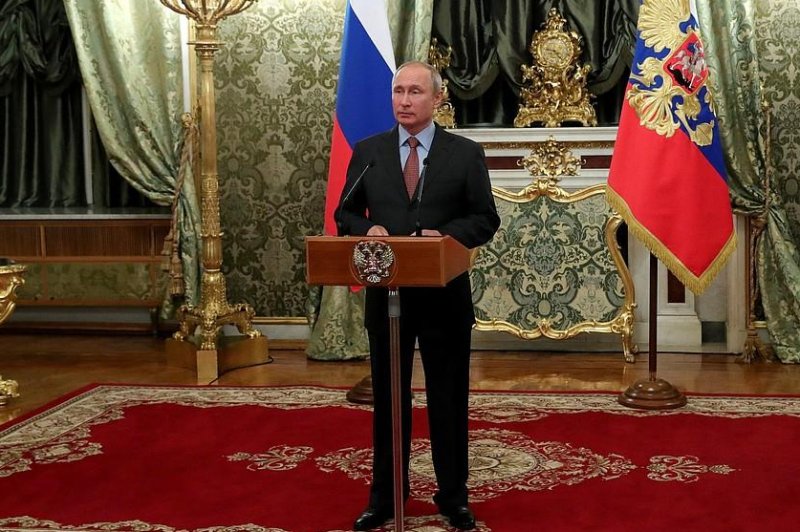 When it comes to navigating through several economic challenges, Russian President Vladimir Putin said it's been mission accomplished. Photo courtesy of the Kremlin

Putin spoke to government employees late Sunday, saying the last six years of his tenure were punctuated by "new challenges and extraordinary developments," from conflict in Syria to economic recession.

"We had to act with resolve and consistency, be ready to assume responsibility and implement the decisions that were taken based on up-to-date approaches," he said in his prepared remarks. "There is no doubt that you have lived up to this task."

Western-backed sanctions targeting Russian energy companies, and historically low crude oil prices two years ago pushed the nation's economy into deep recession and left its currency devalued. Russia, however, is party to an effort steered by the Organization of Petroleum Exporting Countries to curb supplies and that effort is credited with higher oil prices.

Supported by concerns about Washington pulling out of a multilateral nuclear agreement with Iran, crude oil prices are testing multi-year highs Monday morning. At around $75 per barrel for Brent crude oil, the global benchmark, the price for oil is up 62 percent, or about $30 per barrel, from this time last year.

"The economy has become more stable, it has coped with the sharp drop of oil prices, the attempts to bring pressure through sanctions as well as global market fluctuations," Putin said.

Inflation in the Russian economy is forecast to run between 3 and 4 percent for the year and consumer prices are on par with those in advanced economies. Fourth quarter gross domestic product increased 0.9 percent in Russia, following two quarters of 2 percent growth. Full-year GDP growth is forecast at 1.8 percent, compared with 2.7 percent growth expected in the United States this year.

OPEC economists said they expect Russian manufacturing and service sectors to slow down, but that could be offset by growth in household consumption.

"The government has overcome the economic slump and achieved recovery and revival in many sectors," Putin said. "On the whole the economy is entering a growth trajectory."

The Central Bank of Russia last week kept its key rate stable at 7.25 percent annually. The inflation outlook is low, but the value of the national currency is still under pressure from geopolitical tensions.

The U.S. Treasury Department opened a safety valve in late April by offering some sanctions relief to Russian aluminum producer United Co. RUSAL, the second-largest company of its kind outside of China.