Statoil plops down another $1.4B on Johan Sverdrup agreements

Within the next five years, the giant Johan Svedrup oil field in the North Sea will add another 660,000 barrels per day to the market. 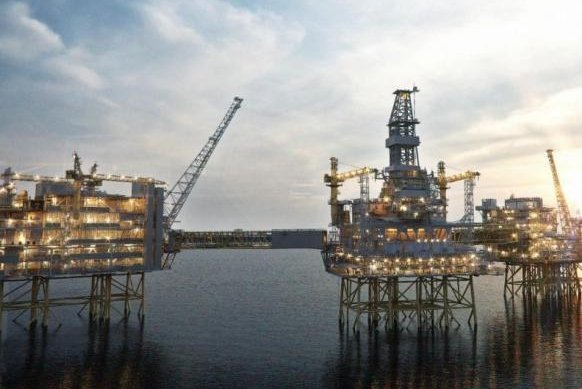 A Norwegian energy company has signed letters of intent worth more than $1.4 billion for the Johan Sverdrup field in the North Sea. Photo courtesy of Statoil

Statoil signed letters of intent Thursday with services companies Aibel, Aker Solutions and Kværner for construction and field center modifications for the Johan Sverdrup project. The total value of the agreements is estimated at more than $1.4 billion.

By signing agreements with three of Statoil's main suppliers for the phase 1 aspect of Johan Sverdrup, the company said it was continuing to spin value into the Norwegian energy sector.

"This should give us a good starting point to deliver Johan Sverdrup phase 2 safely, with quality and on budget," Kjetel Digre, a senior vice president for Johan Sverdrup in Statoil, said in a statement.

Development of the phase 1 part of Johan Sverdrup is already underway and on pace for operations by late 2019. Phase 2 will take production capacity from around 440,000 barrels of oil per day to 660,000 barrels per day by 2022.

On Tuesday, Statoil awarded more than $1.5 billion in contracts to energy services companies for work ranging from maintenance to drilling on 18 of the company's fixed platforms on the Norwegian continental shelf.

Services companies were among those hardest hit by a market downturn that saw the price of crude oil drop below $30 per barrel in early 2016. The awards, meanwhile, came as Statoil is setting up for a name change to Equinor, taking "oil" out of its moniker to reflect a changing energy sector.

Statoil, which holds a majority share in the Johan Sverdrup partnership, in February revealed the resource range has been updated slightly, from 3 billion barrels of oil equivalent to 3.1 billion barrels of oil equivalent. Plans for phase 2 will be submitted to Norwegian regulators in the second half of this year and the total field is expected to stay in production for about 50 years.

For costs, the first phase of development was lowered 4 percent to $11.2 billion. Since the initial plans for development and operation were proposed, phase 1 costs for Johan Sverdrup are down 30 percent.