So far, the extent of environmental damage from a ship carrying about 1 million barrels of an ultra-light form of oil is unclear. 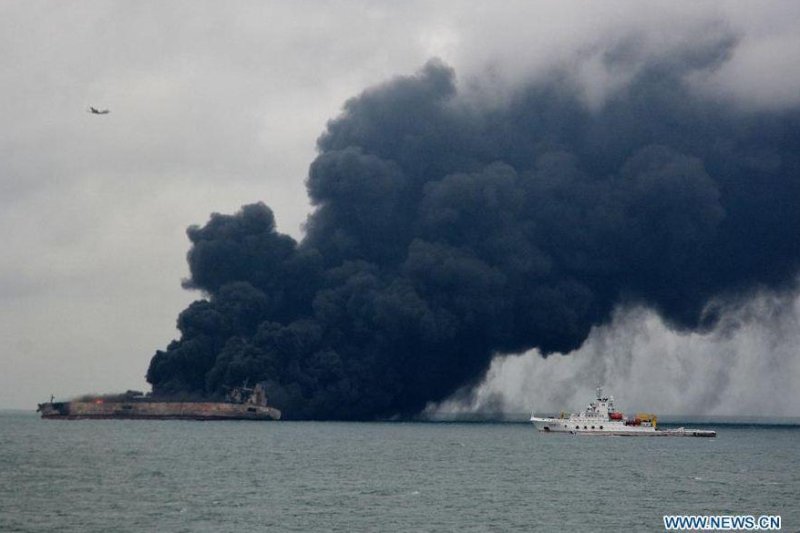 The Iranian oil tanker that crashed with a Chinese freighter carrying grain from the United States is seen listing and billowing thick black smoke during the weekend in an image from China's official Xinhua News Agency.

Jan. 8 (UPI) -- The Iranian tanker carrying a light blend of oil that crashed off the eastern coast of China is clearly sinking, an Iranian consul general said.

The Panama-register Sanchi tanker, run by Iran's official shipper, collided with a Chinese freighter, CF Crystal, off the coast of Shanghai during the weekend. The 21 members of the Chinese vessel were secured. One body believed to be part of the Sanci crew, which consists of 30 Iranians and two Bangladeshis, has been recovered. The other 31 crew members are still missing.

Alireza Irvash, the Iranian consul general in Shanghai, told the official Islamic Republic News Agency on Monday that an oil slick was spreading out from the Iranian tanker at a radius of around a half mile and the ship was still on fire.

"Local Shanghai officials and the government in Beijing are trying their best to rescue the missing crew," he was quoted by IRNA as saying. "The ship is sinking,"

The Iranian vessel was on its way to South Korea with about 1 million barrels of an ultra-light form of oil called condensate when it crashed. The National Iranian Tanker Co., which carried internationally-credited insurance, said it had formed an emergency committee to investigate the cause of the incident.

Thick black plumes of smoke were seen billowing from the listing ship.

The CF Crystal was carrying around 64,000 tons of grain and was only partly damaged. Xinhua reported it was carrying grain from the United States to China at the time of the incident.

Neither of the official government reports gave an indication of the extent of the pollution from the sinking Iranian tanker. The Chinese government said it sent eight vessels, including three designated for cleaning, to the scene.

According to Iranian broadcaster Press TV, this was the second accident involving an Iranian tanker in a year. An oil tanker owned by the National Iranian Tanker Co. hit a Swiss cargo ship near Singapore, though no spills or injuries were reported.

Crude oil prices were only slightly higher than Friday's close in overnight trading.