TransCanada announces it received the permit needed to proceed with the cross-border pipeline. 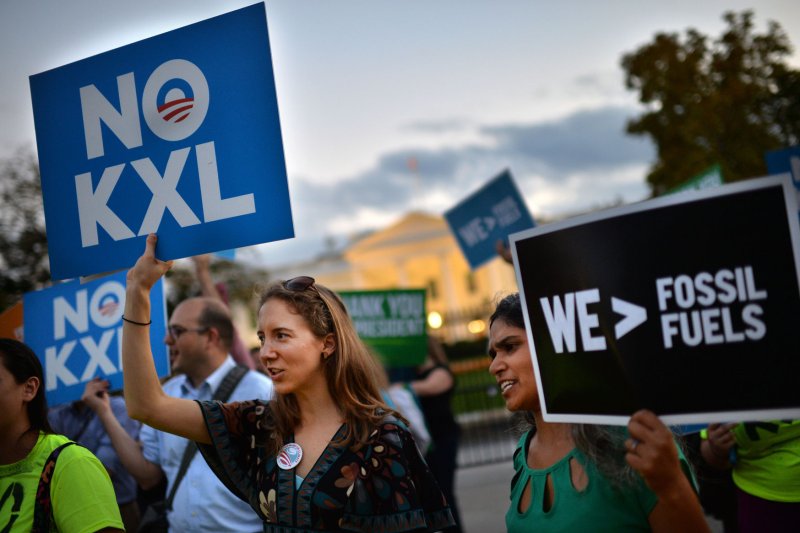 After a rejection by the previous administration on environmental grounds, the Trump administration granted necessary permit Thursday for the cross-border Keystone XL pipeline. Photo by Kevin Dietsch/UPI | License Photo

March 24 (UPI) -- The Keystone XL oil pipeline from Canada still faces a range of potential hurdles even with a sign-off from the U.S. government, analysts said.

U.S. State Department spokesman Mark Toner teased a move on the Canadian oil pipeline by announcing Thursday the government was "in a pre-decisional state," but pipeline company TransCanada and the State Department on Friday confirmed the rumors with an announcement the permit needed to build the cross-border project has been issued.

"This is a significant milestone for the Keystone XL project," TransCanada President and CEO Russ Girling said in a statement. "We greatly appreciate President Trump's administration for reviewing and approving this important initiative and we look forward to working with them as we continue to invest in and strengthen North America's energy infrastructure."

Trump pledged early in his tenure to fast-track the permitting process for pipelines like Keystone XL and the Dakota Access project. Keystone XL was sidelined by President Obama on environmental grounds.

RELATED Both sides of the border praise Keystone XL

Ole Hansen, the head of commodity strategy at SaxoBank, told UPI the project would help boost prospects for a Canadian economy bruised by lower commodity prices and higher transportation costs. Most of the Canadian oil is landlocked and Keystone XL would give Alberta oil sands a chance to leave North America through southern U.S. ports. While the pipeline is part of Trump's energy infrastructure agenda, it still faces roadblocks.

"The Nebraska Public Service Commission still needs to approve the project while individual landowners refusal may also delay the process," he said. "The environmental aspect of the deal, which would increase heavy CO2 emitting Canadian tar sand production, may still cause a long delay before the pipeline is eventually being built."

TransCanada said the pipeline is part of a U.S. growth portfolio that would drive more than $15 billion in investments and create "thousands" of jobs. Many of those jobs would be during the initial construction phase.

The pipeline company altered the original route through the United States to avoid an aquifer in Nebraska and said Friday it would continue to engage landowners and other interested parties in Nebraska, Montana and South Dakota, where it would need to obtain the necessary permits and approvals to advance the project to construction.

Sandy Fielden, the director of research, commodities and energy at Morningstar, told UPI one of the issues is whether or not Keystone XL is even necessary. Kinder Morgan is moving ahead with an expansion to its Trans Mountain oil pipeline system to Vancouver, a project that could be completed by December 2019. By his estimate, Keystone XL would be in service by the second quarter of 2019 at the earliest.

Fielden said Kinder Morgan "has shippers already lined up," though with Canadian oil production slated to rise, at least one more pipeline is needed "maybe more."

RELATED What oil and gas look like under Trump

"In any case, Keystone won't be built -- approval or no -- unless shippers sign up to underwrite the cost," he said.

Earlier this month, Alberta Finance Minister Joe Ceci said getting a Canadian pipeline built to a Canadian coast was "the best way" to get resources on the global market.