With a few hundred feet to go, a federal decision riles both sides of the debate. 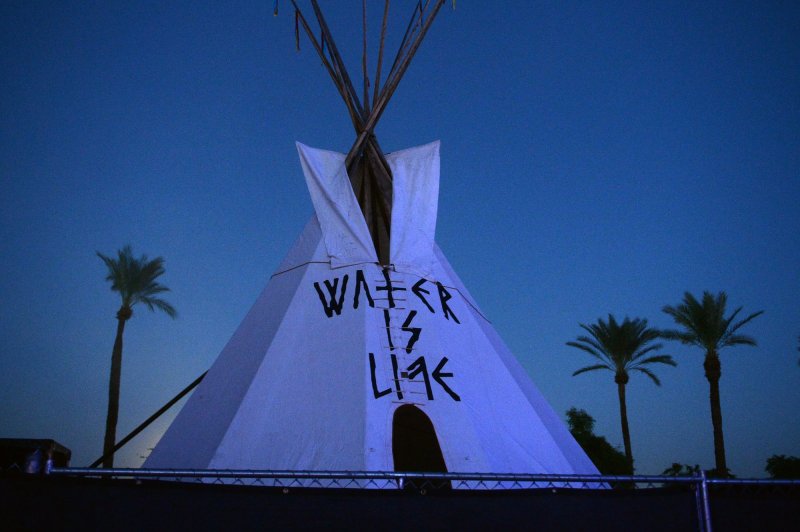 A teepee with the message "Water is Life," referring to the Dakota Access pipeline protest is seen as Neil Young performs onstage during Desert Trip 2 at the Empire Polo Field in Indio, Calif. on October 15. Federal decision halts construction of the last few hundred feet of the controversial oil pipeline. File Photo by Jim Ruymen/UPI | License Photo

WASHINGTON, Nov. 15 (UPI) -- A federal decision on the Dakota Access pipeline shows Washington is listening, though parties to the debate differed on the wisdom of that attention.

The U.S. Army Corps of Engineers said further review was needed in order to assess tribal interests associated with the construction of the last few hundred feet of the Dakota Access pipeline. The decision means pipeline consortium Energy Transfer Partners is delayed in the construction of a $3.7 billion pipeline meant to carry hundreds of thousands of barrels of oil from North Dakota oil fields to Illinois and then onto the southern U.S. coast.

The construction of the pipeline has been met by months of demonstrations, and sometimes violent protests, in and around the construction site. The United Nations said law enforcement personnel responding to the demonstrations may have used excessive force at times. While a rights commissioner said protests have been violent, some of the response was disproportionate.

A federal appeals court in October backed a lower court's ruling that construction can proceed in the face of challenges to the extent of U.S. Army Corps of Engineers consultation with tribal groups concerned about the sanctity of sacred sites.

The U.S. Departments of Justice, the Army and the Interior issued an order temporarily halting pipeline construction in the Lake Oahe area, the place at the center of the tribe's concerns, earlier this year. The Standing Rock Sioux tribe is leading the challenge against the pipeline construction and its chairman said the latest federal decision shows Washington is heeding their concern.

"We are encouraged and know that the peaceful prayer and demonstration at Standing Rock have powerfully brought to light the unjust narrative suffered by tribal nations and Native Americans across the country," Chair Dave Archambault II said in a statement.

According to Archambault, the last few hundred feet of construction requires drilling under the Missouri River and puts an oil pipeline in the heart of a water supply for his tribe and 17 million people downstream.

"A single spill would be culturally and economically catastrophic for the tribe," he said.

By some estimates, there's not enough pipeline capacity to accommodate and distribute the amount of oil produced in North Dakota, so companies are relying on rail transit to make up the difference. Rail carries its own risks, however. At least 40 people were killed in Lac-Megantic, Quebec, in the 2013 derailment of a train carrying tankers of crude oil from North Dakota to Canadian refineries.

The American Petroleum Institute, which lobbies on behalf of the oil and gas industry, said the federal decision ignores the thorough vetting for the pipeline's construction and ignores the changing infrastructure needs in the shale era.

"Modernizing our infrastructure helps move energy our nation demands more efficiently, helps save consumers money, and provides tens of thousands of well-paying jobs," Robin Rorick with the API said in a statement. "It's unfortunate that the Obama administration would turn its back on its own citizens and put politics over sound public policy."