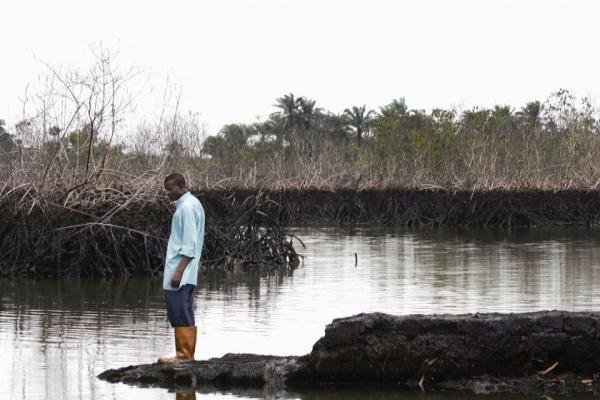 Niger Delta Avengers said it's been able to disrupt oil production in the Niger Delta without bloodshed. Photo courtesy of Amnesty International.

ABUJA, Nigeria, June 3 (UPI) -- A militant group waging war on oil installations in the Niger Delta said they can bring regional production down significantly without bloodshed.

The Niger Delta Avengers surfaced earlier this year by staking claims to attacks on Niger Delta installations run by companies like Italy's Eni and Royal Dutch Shell. The militant group has since turned to social media platforms to publicize its campaign.

At about 3:30am our (@NDAvengers ) strike team Blow up the Brass to Tebidaba Crude oil line in Bayelsa.. #BOOM

The group said its latest barrage was in line with a "promise" that it would bring crude oil production in the Niger Delta region down to zero. In a statement published late Thursday, spokesman Mudoch Agbinibo said the campaign was operating in a way that was specific to oil installations. According to him, the Niger Delta Avengers was able to bring Nigerian oil production from 2 million barrels per day to 800,000 bpd without any fatalities.

"We are warning every group that follows our footsteps," he said. "The days of killing and kidnapping are over."

A report from Nigerian newspaper Punch said two soldiers and six civilians were killed Wednesday during an attack on a housing facility operated by the Nigerian Petroleum Development Co. While no group claimed responsibility for that attack, the newspaper said security sources suspected the Niger Delta Avengers.

The group's spokesman last week warned its campaign was about to get "bloody."