Company reported similar incidents in the region in early 2014. 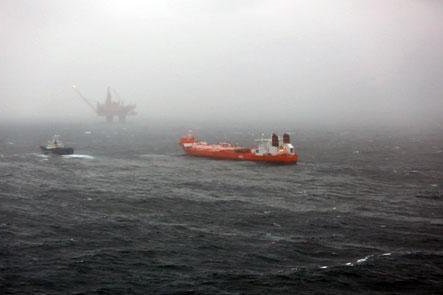 STAVANGER, Norway, Oct. 9 (UPI) -- About 250 barrels of oil spilled from a platform in the North Sea during the transfer of products to an oil tanker, Norwegian energy company Statoil said.

Statoil said the oil spill was discovered during the loaded of oil from the Statfjord A platform in the North Sea to oil tanker Hilda Knutsen. The company said in its latest update on the spill that about 250 barrels in total were released into the North Sea.

"Further assessment and investigations will uncover the scope and causes [of the spill] in more detail," the company said in a statement.

Loading to Hilda Knutsen was halted, though operations at the Statfjord A platform were proceeding as normal.

Statoil said the relevant authorities were notified, though there were no statements from the Norwegian Petroleum Safety Authority.

In January last year, the company shut down operations at the Statfjord C platform after emergency systems detected an oil leak. More than 250 crewmembers were evacuated to lifeboats but returned to their living quarters later in the day.

No injuries were reported. Statoil said the weather in the area at the time of the Stratfjord C incident was "harsh."

Statoil said the region is producing an average 80,000 barrels of oil per day.