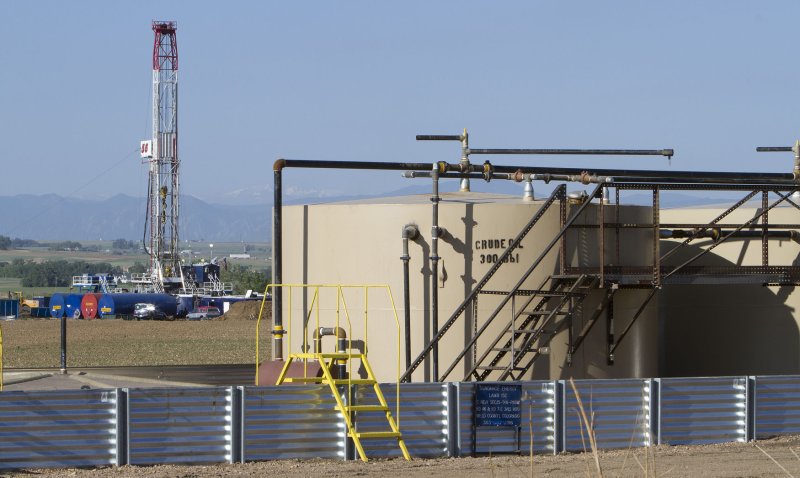 A drilling rig operates on farmland near a storage tank at the Niobrara oil shale formation in Weld County, North eastern Colorado on May 30, 2012. Gas and oil companies are using large amounts of water to obtain shale oil and gas in a process called hydraulic fracturing or fracking. UPI/Gary C. Caskey | License Photo

"America is in the midst of a game-changing energy revolution," API Chief Economist John Felmy said in a statement Monday.

He was commenting on a report from the U.S. Energy Information Administration, which predicted record-setting levels of oil and natural gas production in the United States.

The EIA in its Monday report said crude oil production in the United States should reach 9.6 million barrels per day by 2016, equaling a record set more than 40 years ago. Crude oil production is expected to decline after 2020, though EIA said natural gas production should increase steadily through 2040.

"This potential has been unlocked by innovations in hydraulic fracturing and horizontal drilling that have made America the world's top energy producer," Felmy said.

Hydraulic fracturing, known also as fracking, is a controversial drilling practice that's given energy companies access to oil and natural gas deposits that were previously out of reach. Some of the chemicals used in the process are viewed as threats to the environment.

"This is not only about energy, but also is proving a big boost to the U.S. economy at a time when it really needs a boost," he said in a statement Monday.