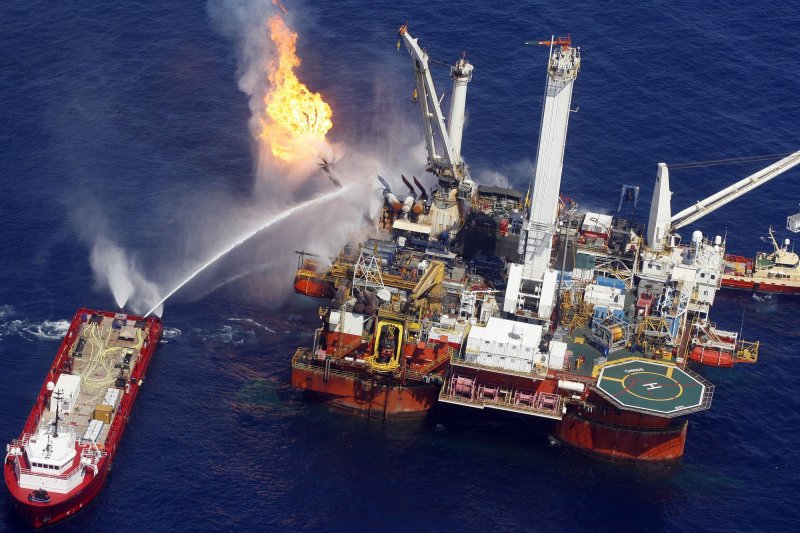 The Q4000 burns off oil and gas in a huge flare at the BP Deepwater Horizon blowout site in the Gulf of Mexico July 10, 2010. BP is changing the device capturing oil from the leaking well and plans to have a new, more efficient device in place in seven days, though in the meantime oil is gushing unchecked from the well. UPI/A.J. Sisco. | License Photo

The U.S. government lifted a moratorium on deep-water drilling in October, six months after the Deepwater Horizon oil rig caught fire and sank in the Gulf of Mexico. The deadly accident led to one of the worst accidental offshore oil spills in the history of the industry.

The Bureau of Ocean Energy Management, Regulation and Enforcement announced Monday that it awarded Noble Energy a permit to drill in the Mississippi Canyon block about 70 miles south of the Louisiana coast.

"This permit represents a significant milestone for us and for the offshore oil and gas industry, and is an important step towards safely developing deep-water energy supplies offshore," said BOEMRE Director Michael Bromwich.

The exploration well was drilled to more than 13,000 feet in 6,500 feet of water before the moratorium. The permit is for what the BOEMRE described as a bypass well meant to drill around a mechanical problem in the original hole.

Noble contracted a well containment company to use its capabilities in the event of a disaster like the April spill.

"Our partnership with others in the Helix Well Containment Group has increased the deep-water gulf subsea control and containment capabilities," said Noble Energy President and Chief Operating Officer David Stover in a statement. "The industry has improved its ability to respond to surface spills as well."