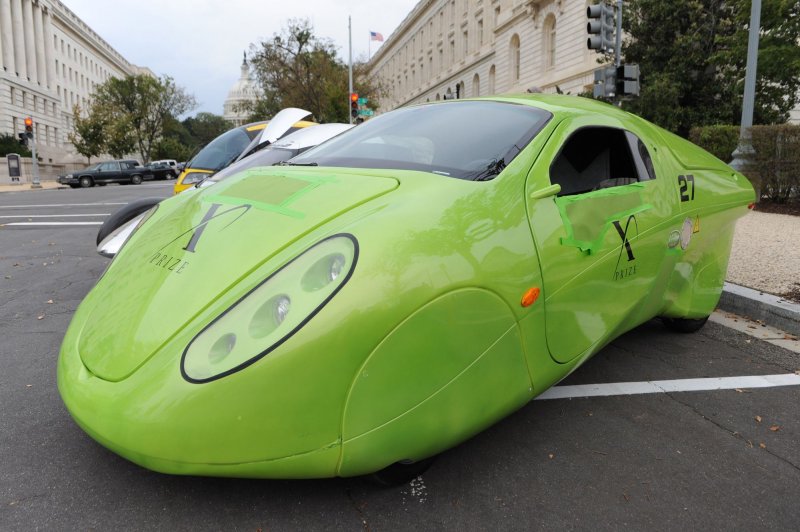 The Wave II, a 187 MPGe electric car made by Li-ion Motors Corp is seen on Capitol Hill in Washington on September 16, 2010. The vehicle is one of the three winners of the X Prize, which is awarded to teams who create new vehicles that inspire a new generation of viable, safe and super fuel-efficient vehicles that can achieve over 100 miles per gallon. UPI/Kevin Dietsch | License Photo

WASHINGTON, Feb. 9 (UPI) -- Though a goal of putting 1 million electric vehicles on U.S. roads by 2015 is ambitious, it's achievable with the right level of support, a U.S. agency said.

U.S. President Barack Obama said during his State of the Union address in January that, with the right incentives, the U.S. economy can move away from oil and become the first nation in the world to put 1 million electric cars on the road by 2015.

Washington aims to introduce measures that would give rebates to consumers, provide investments in innovative technology and reward communities that invest in electric vehicle infrastructure.

The U.S. Energy Department said in a report that tax credits and support for research and development could bring Obama's vision to fruition.

David Sandalow, assistant secretary for policy and international affairs at the Department of Energy, said in a statement that the 2015 target date was a main component of the strategy needed to reduce U.S. dependence on foreign oil.

"This is a race America can win -- if we answer the president's call to out-innovate, out-build and out-compete the rest of the world," he said.