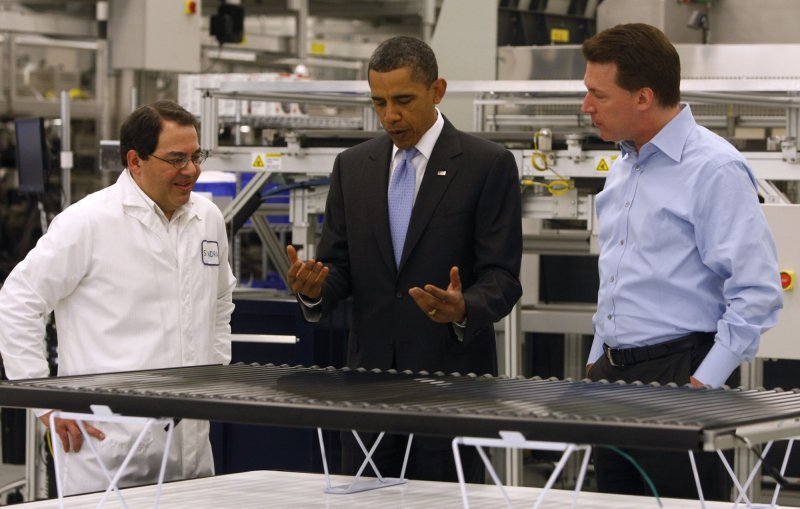 The latest findings come through research by a British market leader in renewable energy production following on from studies at Duke University in Durham, N.C.

The nuclear power generation industry and its various lobbies have successfully campaigned for the nuclear option as the most economical for consumers planning for large increases in demand for electricity.

Outside the United States, too, nuclear power generation has won new friends in recent years despite controversies over nuclear energy's dual use -- the other as a weapon of mass destruction.

"The cost of generating power from solar photovoltaic systems has steadily fallen over the last 10 years while the projected costs of constructing the new nuclear plants have ballooned.

"The cost of producing and installing PV cells has been steadily dropping for some years," he said. "A PV system now costs about half of what it did in 1998."

Developments in solar technology and manufacturing processes combined with a steady increase in demand are causing the reduction in costs, he said, adding that mO3 expects that decline to continue.

Research at Duke concluded that the costs of solar power had reached the point of "historic crossover" with the nuclear industry in North Carolina. The price of nuclear is expected to be 16-18 cents per kilowatt as compared to solar PV at 14 cents per kilowatt in 2011.

"It can be predicted with some confidence that the same will be true in the U.K. by the time that the new nuclear reactors have been built," said Moss. "Nuclear electricity's strength is being able to provide CO2 free base load electricity to the grid, as nuclear is not flexible and can only operate 24/7. Therefore the future requires a mix of technologies with renewable and nuclear being able to provide a sustainable solution."

He said, "Solar PV's time is now coming of age with predictions of 30 percent of the world's energy coming from PV by 2050, by which time economic storage of electricity will be possible and we will no longer need base load power stations or possibly even a grid!"

"With its fuel for free, the sun, solar electricity will be the mainstream clean energy for our, and our children's, future!" said Ray Noble, a director at mO3.

Moss asked for the risk factor to be taken into account.

The company says it plans to generate 1 gigawatt from renewable power from solar parks in the United Kingdom.