Analysis: Can biotechnology save ethanol? 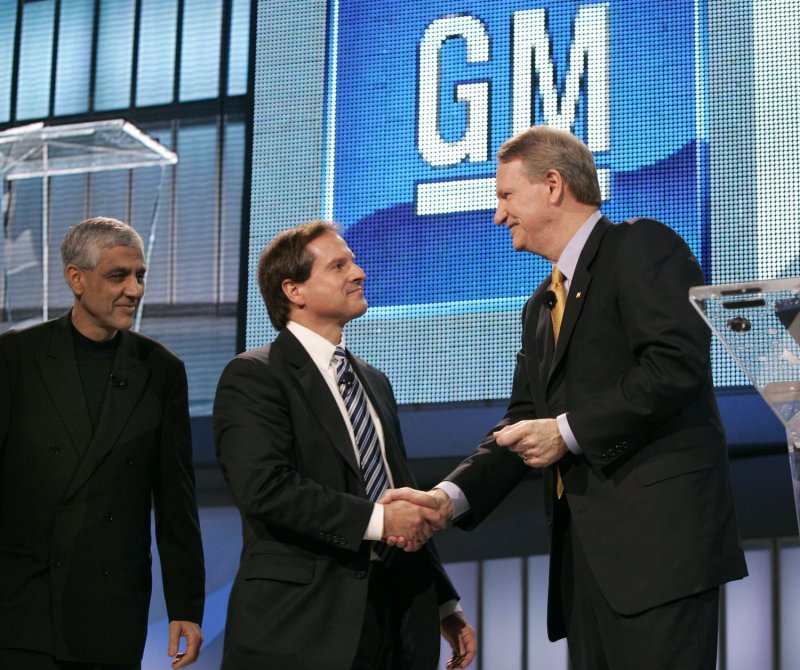 General Motors Chairman and CEO Rick Wagoner (R) greets Bill Roe (C) and Vinod Khosla of Coskata, Inc. after announcing a partnership with Coskata to use the company's breakthrough technology that produces ethanol from trash, old tires and other waste, at the 2008 North American International Auto Show in Detroit, Michigan on January 13, 2008 . Coskata's proprietary process will produce ethanol for less than $1-per-gallon. (Photo by John F. Martin for General Motors) | License Photo

Some experts have questioned the feasibility of Congress's new biofuels mandate, but emerging biotechnologies may boost the industry above and beyond expectations.

Traditional corn ethanol has received a bad rap in the popular press lately due to concerns increased production and conversion of corn into fuel may increase emissions and raise food prices.

Not everyone agrees with these assertions, but almost everyone does agree the fuel of the future will not rely on corn kernels, but on new feedstock options called cellulosic sources. These are often waste products, such as garbage and wood chips, or non-food crops, like switchgrass.

Cellulosic sources have the potential to fuel vehicles without taking land needed to raise food, as well as a host of other benefits. But converting these tough materials into ethanol is much more difficult than using corn.

As a result, some experts have expressed doubt over whether the biofuels industry will be able to meet the new Renewable Fuels Standard, which requires that 21 billion of the 36 billion gallons required by 2022 come from "advanced sources," or non-traditional ethanol.

"While the situation is very uncertain at this early date, our current view is that available quantities of cellulosic biofuels prior to 2022 will be insufficient to meet the new RFS targets," Caruso said at a Senate Energy Committee hearing.

Biotechnology companies disagree. The products they're developing will unlock the industry, they say, and lead to commercialization within a couple of years.

The same radical change will occur in the biofuels industry as biotechnology plays a larger role in fuel production, said Mike O'Brien, spokesperson for Gevo, a biotechnology company that focuses on biofuels development.

"I've already seen how biotechnology can transform things and the impact it can have on industry in the United States," O'Brien told United Press International. "(Biofuels are in) an early stage, and biotechnology can speed up the delivery and adoption of new technologies."

Biotechnology companies are working on developing a wide variety of products to address different aspects of the process, from field to fuel station.

The first step toward efficiency lies in more advanced plant varieties. Ceres, an energy crop company, identifies specific DNA sequences in plants that code for desirable traits, such as increased biomass and decreased demand for water and fertilizer, and then uses traditional breeding methods to produce better crops for fuel.

"Corn farmers could supply over 200 million dry tons annually within three to five years," Erickson said, citing the findings of a recent report released by BIO on the topic. "Collection of 30 percent of current annual stover production would yield 5 billion gallons of ethanol."

There are some problems with using these crop residues, however. Right now, most farmers leave the stover and straw on their fields, providing needed carbon for the soil, preserving soil quality and decreasing erosion. If too much is removed, the soil could be damaged, agricultural experts say.

And determining how much can be removed varies greatly from field to field, Erickson told UPI.

"You have to look at each individual field -- the slope, type of soil, amount of rainfall, etc.," he said.

Researchers at Colorado State University are developing software to make this easier for farmers to figure out, Erickson said. Farmers input information about their field, and the program computes the amount of residue needed to maintain soil quality. The rest could be converted into fuel.

"In some cases, it can be upwards of 80 percent (that's removed)," Erickson said.

Once the biomass arrives at the fuel plant, a number of other biotechnology advances will make it increasingly easier to convert it to fuel, said Jack Huttner, vice president of biorefinery business development at Genencor, a biotechnology company.

The first step in producing ethanol is breaking the feedstock down so that yeast can access the sugars contained in the plant and turn them into alcohol.

"But when you're dealing with (cellulosic) biomass, it's a very tough (substance)," Huttner said. "We've developed enzymes that break down the cellulose … into simple sugars so yeast can ferment it into alcohol."

When breaking down cellulosic sources, a number of different enzymes are needed, making the process complex and expensive. However, two college professors at the University of Maryland have discovered a process, based on one particular organism, that they believe will enable more efficient, economical production.

The organism contains a variety of enzymes, which work together to break down all sorts of carbohydrates, including woody materials, algae and even crab shells, said Ron Weiner, who discovered the bacterium's promising properties along with Steve Hutcheson.

"The organism contains more enzymes and different kinds of enzymes to break down more carbohydrates than any other known bacterium or organism," Weiner told UPI. "That means we don't have to use feedstock to produce fuel."

As fuel producers turn toward these new technologies, though, they should focus on producing biobutanol from the feedstocks, instead of solely ethanol, said Gevo CEO Pat Gruber.

Biobutanol can be produced from corn or any other cellulosic source, just like ethanol, but has a number of advantages over the traditional product, Gruber told UPI.

"Butanols have a higher energy density than ethanol, so you can see an improvement in miles per gallon when you use it (over traditional ethanol)," he said.

Another important characteristic of butanol is its ability to be transported by pipeline. Ethanol cannot currently be delivered via pipeline because of its corrosive qualities and the possibility that water in the pipeline might damage the fuel. In addition, biobutanol can be produced from ethanol plants that have been retrofitted for the new fuel, requiring fewer up-front costs.

"Our vision is to work with every single ethanol producer and help them switch to butanol," Gruber said.