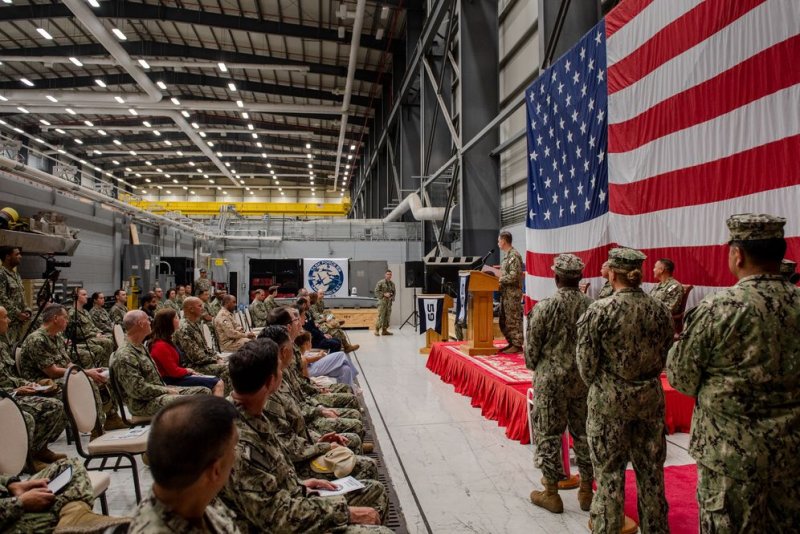 The U.S. Navy on Thursday stood up Task Force 59, which is based in the U.S. 5th fleet area of operations and charged with incorporating unmanned systems into maritime capabilities. Photo by Mass Communication Specialist 2nd Class Dawson Roth/U.S. Navy

Sept. 9 (UPI) -- The U.S. Navy has set up its first-ever task force that'll use a vast ocean area in the Middle East as the setting for learning how to incorporate unmanned systems and artificial intelligence into maritime operations.

Task Force 59 will specifically be focused on the U.S. 5th Fleet area of operations, the Navy said on Thursday.

The fleet was selected for its strategic importance, as well as its unique geography and climate that includes nearly 2.5 million square miles of water in the Arabian Gulf, Gulf of Oman, Red Sea and parts of the Indian Ocean.

The task force is the latest effort by the Navy to incorporate drones and unmanned systems.

The Navy has in the last several years been testing out unmanned aerial and surface vessels.

The branch sent its second unmanned surface vessel across the Pacific Ocean in July as part of its Ghost Fleet Overlord program.

And last month, the Navy tested its first littoral combat ship-based unmanned mine detection system and used vessels with similar capabilities during an exercise.

The task force will be broader than just working with drones and will look into incorporating entire unnamed systems into its domains, U.S. 5th Fleet commander Vice Adm. Brad Cooper told reporters at a recent roundtable, USNI News reported.

"We're going to take today's unmanned systems -- which are largely in the air, as you know -- we've had [MQ-1] Predators, and BAMS-D, airborne platforms out there for some time," Cooper said at the roundtable.

During the coming weeks, the task force will conduct operations intended to build confidence in "human-machine teaming."

The Navy will have an opportunity next year to demonstrate the scalability of unmanned systems at International Maritime Exercise 22, according to the Navy.

The exercise will include more than 60 nations and international organizations that will use the unmanned systems in various operations scenarios.