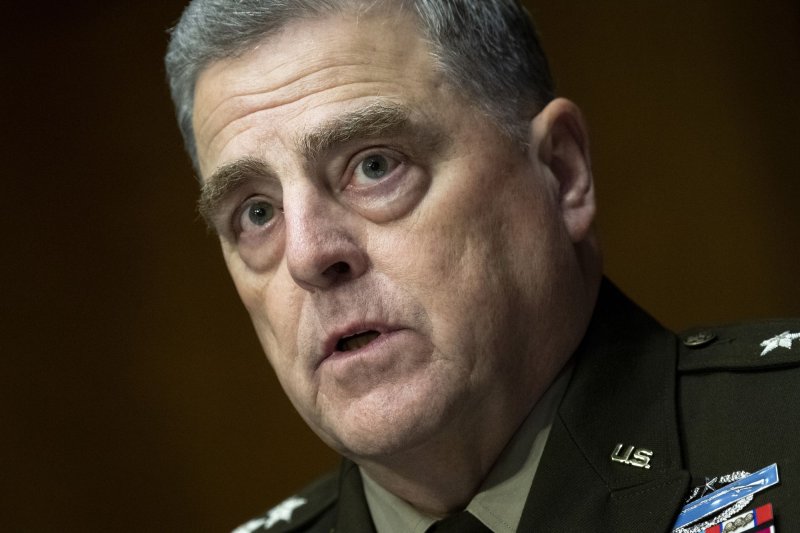 Chairman of the Joint Chiefs of Staff Gen. Mark Milley emphasized the importance of emerging technologies in future wars in remarks on Monday. File Photo by Caroline Brehman/UPI
| License Photo

The chairman of the Joints of Chiefs of Staff made the remarks at the Navy League of the United States' Sea-Air-Space Global Maritime Exposition at National Harbor, Md., on Monday.

"Those technologies are available right now to every country in the world," Milley said. "There's nothing particularly secret about many of them. And I would argue that the country that masters those technologies ... is likely to have a significant, and perhaps decisive advantage."

Director Mike White in the Undersecretary of Defense for the Research and Engineering office recently referred to hypersonic weapons as a key element of the Defense Department's modernization efforts.

And the U.S. Department of Defense said recently the development of hypersonic missiles is accelerating within its $6.6 billion budget for the weapons program.

Milley emphasized the importance of keeping up with emerging technologies by referring to the hundreds of thousands of U.S. service members killed in World Wars I and II after the nation was slow to arm.

"Failure to recognize, adapt and capitalize on the changing character of war and failure to see the future produces devastating consequences," he said. "And it did for our military. It resulted in losses on a scale that's difficult to fathom that none of us alive today have experienced."

"In my mind, no one has ever done it better than the United States Navy, in the history of the world," Milley said. "The same is true for air and space and cyber in our ground forces. In fact, our joint force is second to none."

Three military sea service leaders also spoke at the exposition about the challenges ahead, including aviation and private and public shipyard maintenance and unmanned systems and live virtual training innovation.

Navy Admiral Michael Gilday said the Navy is focused on producing deliverables on myriad maintenance issues in a timely and accountable way.

For innovation issues -- which are being pushed across the military services -- the focus is on development, testing, experimentation, learning, and quickly generating outcomes, he said.

"It's our hope that those areas produce for us a more capable, lethal, ready Navy, maybe by the end of the decade," Gilday said.

Marine Corps Gen. David Berger said that future warfighters will not have the long military buildup overseas that occurred during Operation Desert Storm, and training and education should focus on developing leaders who are willing to take risks.

"All three of us are pushing hard for wargaming experimentation exercises that force our leaders into circumstances where they have to make decisions under pressure," he said.

Coast Guard Adm. Karl Schultz mentioned the importance of the Tri-Service Maritime Strategy, which called for increasing integration in all domains.

The strategy also stresses modernization among the Navy, Marine Corps and Coast Guard in response to threats from China and Russia. Along with the blue water Coast Guard, his service also has law enforcement authorities, search and rescue assets and other capabilities, Schultz noted.

Defense News // 7 hours ago
U.S. Army finishes exercises in Turkey as part of Europe-focused drill
Sept. 21 (UPI) -- A multinational military exercise intended to improve interoperability between the U.S. Army and allied nations wrapped up its final phase in Turkey on Monday.