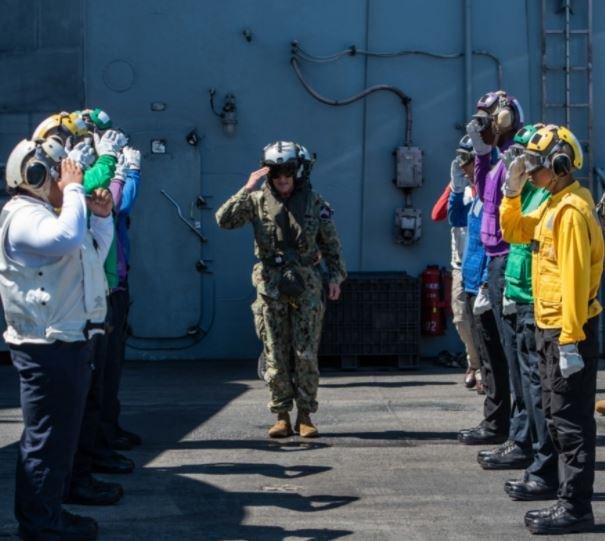 June 4 (UPI) -- The aircraft carrier USS Ronald Reagan was visited by 7th Fleet Vice Adm. Bill Merz this week while in the Philippine Sea, the U.S. Navy said on Friday.

In a rare action, Merz boarded the ship after it left Fleet Activities Yorkusuka, Japan, its home base, on May 24. He attended meetings with warfare commanders while aboard, the Navy said in a statement.

The vessel is the Navy's only forward-deployed aircraft carrier, and is currently patrolling the Indo-Pacific region, accompanied by Task Force 70/Carrier Strike Group 5, which includes the aircraft of Carrier Wing 5 and two escort ships.

Merz formally took command of U.S. 7th Fleet in May.

"In the end, we [of U.S. 7th Fleet] are stronger, and you led us to that higher position of strength. I appreciate that," Merz told personnel aboard the ship.

"I couldn't be more impressed by how you have conducted yourselves both at sea and in port. Ronald Reagan and Task Force 70 are a tough team, and I need tough," Merz said.

Merz also visited the guided missile cruiser USS Shiloh, one of the ships in the Carrier Strike Group.

He toured the ship's combat information center and engineering central control station, and spoke with personnel during his visit.

"Most people are not used to a three-star admiral coming up to them and greeting them on personal level," commented Yeoman 2nd Class Austin Toth." Seeing our top leadership from back home on board with us helps us see that we are in good hands."

Merz concluded his visit aboard the USS Shiloh with a message for the crew.

"I'm very proud of what you've done," he said, "and I will leave you with our common theme: know your role and play hard. It's how we do what we do, and better than anyone else. So play hard 67 and take care of Reagan."

The visit came at the conclusion of integrated operations between the strike group and the Japan Maritime Self-Defense Force, which ended on Saturday.

Defense News // 5 days ago
U.S. Space Force to take over SATCOM operations from Army, Navy
Sept. 22 (UPI) -- The U.S. Space Force will take over satellite communications billets, funding and mission responsibility from the U.S. Army and Navy, the Department of Defense announced Wednesday.

Defense News // 6 days ago
U.S. Army finishes exercises in Turkey as part of Europe-focused drill
Sept. 21 (UPI) -- A multinational military exercise intended to improve interoperability between the U.S. Army and allied nations wrapped up its final phase in Turkey on Monday.