Cyber Command chief stresses need for U.S. to stay ahead in cybersecurity 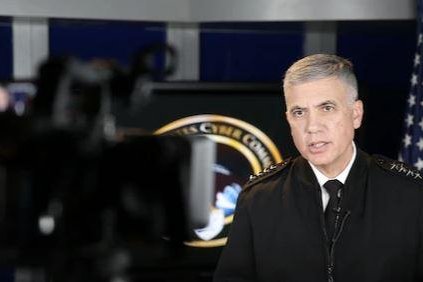 May 28 (UPI) -- The chief of the U.S. Cyber Command stressed the need to stay ahead of enemy cybersecurity efforts, to gain strategic advantage, in an address this week.

Gen. Paul Nakasone, who is also director of the National Security Agency, told the non-governmental Armed Forces Communications and Electronics Association on Thursday that the Cyber Command routinely sends teams of military cybersecurity experts to protect against adversaries conducting cyber warfare at the invitation of foreign partner governments.

He noted that U.S. economies, infrastructure and electrical processes, beyond the scope of the military, are targeted.

"Our adversaries are operating with a scope, scale and sophistication unlike anything we've seen before," Nakasone said.

The tactics of adversaries, he said, has evolved beyond phishing and exploitation of weak passwords, moving toward targeting and infiltrating computer systems and exploiting vulnerabilities.

The "new risk calculus," he said, has changed the traditional threat landscape.

"China is becoming more assertive economically, diplomatically, militarily and technologically," Nakasone added. "It seeks to undermine a stable and open international order to establish its credibility and dominance in the global system."

"Russia has demonstrated its ability to conduct influence operations in numerous countries, often by combining effective target development with the power of social media," Nakasone added.

He also noted cyber threats from Iran and North Korea.

Nakasone said that before the 2020 U.S. presidential election, Cyber Command conducted at least 11 forward operations, known as "hunt forward" deployments, based on "invitations from a foreign government to work with them to hunt on their networks to look for adversaries."

"Why is that important? Because, as you can well imagine, as we go out broadly and hunt on different networks, we can find adversaries, we can identify their trade craft and identify their tools. I think this is a growth industry for us," Gen. Nakasone observed.

The command is involved in investigating several recent cybersecurity invasions, including the ransomware attack this month against Colonial Pipeline, which has blamed on Russia.

The attack shut down deliveries of about 45 percent of gasoline and other fuels consumed on the East Coast.

Additionally, the U.S. Departments of Homeland Security, Commerce and Treasury were breached in December 2020 by hacking linked to weaknesses in network security software.

The Russian intelligence service, SVR, is believed to be behind the attacks, although Russian officials have denied involvement.